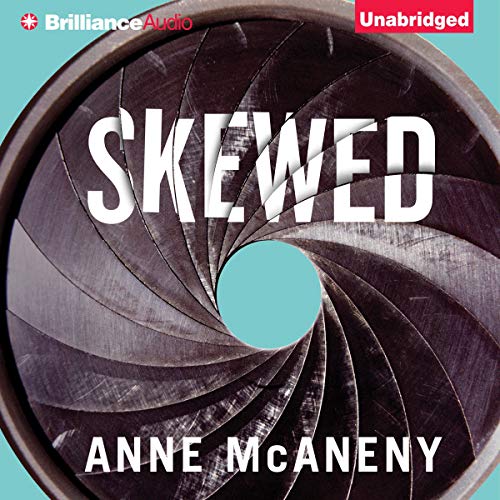 No birth announcement could top the headlines from the day Janie and Jack Perkins entered the world. As twins born to a mother in a coma - courtesy of a bullet from their father - the sensational story of their birth never quite died down. While Jack still craves the flash of a camera, Janie seeks sanctuary behind the lens - as a crime scene photographer.

Thanks to Janie's line of work, she's comfortable around gruesome murders. But when old photos of her mother's body arrive in the mail, they open deep-seated wounds and raise chilling new questions about who really was responsible for that deadly night.

Did Janie's father spend decades in jail as an innocent man? Did an infamous serial killer actually take her mother's life? With photos in hand, Janie brings the truth into focus. But when her investigation ends up evoking the wrath of the long-dormant killer, she must race to piece together the final evidence - before she becomes the target.

What listeners say about Skewed

This book had a good storyline and I did become interested in the ending.
However chapter 37 almost made me physically ill. The way it described what was happening, was so over the top.
Also the use of the word ‘spastic ‘ in a derogatory way was disgraceful.
5/10

Twins born to a fatally injured mother kept alive until their birth. The mother murdered by the father of the twins, charismatic, high-powered, political candidate Grady MacLemore. Thirty years later we catch up to the twins, gone their separate ways, Jane into crime scene photography, and Jack into politics. Photographs from the crime scene mysteriously come into Jane's possession, and put her on the trail of the truth about why her mother was murdered--a question never answered by Grady's trial and conviction.

The plot is imaginative and unusual, convoluted but mostly successful, the writing more than adequate. I don't think the author pulled off the chasm in the twins' relationship, but the switches from past to present were done well enough and worked for me. The ending was a little strained, but still held together, and until close to the finish, had me wondering. I recommend this book as interesting and entertaining.

Was really intrigued by the summary of this book. However, all the characters felt flat and unrealistic to me. All very exaggerated stereotypes. I tried to get into it and listened for the first 2 hours, then had to give up...

Struggled to finish. I just slogged through it. The reader? The story? Don't know.

This one pulled me in right from the start. It took me a minute to get used to the back and forth between the past and present, but I wound up really enjoying that. The characters were likable, most of them, and relatable; felt almost like you knew them. I was pretty pleased with myself for figuring the mystery out early on, only to have a HOLY CRAP moment much later on. I can't say more without giving stuff away. Pretty good plot twists though. I kept telling myself 'just one more chapter' and wound up crawling into bed about an hour later. Couldn't put it down!

I really liked the book. The story line was something new and refreshing in the suspense and thriller genre. Would definitely read another book by this author

I manage to listen to about the quarters of the book. But none of the main characters were likable or relatable. Janie looked down her nose at everyone she meet and the author described most transitory characters in a bad light. Additionally, the murderer and his motivation was uninteresting. I try to finish every book but I couldn't do it with this one.

What did you love best about Skewed?

The constant guessing, not being able to figure things out until the last few pages!!
Kept me on the edge of my seat!

What was one of the most memorable moments of Skewed?

The first couple of pages, I had to go back and read them over and over again.
Also, when Janie reads her mother's journal.

What does Emily Sutton-Smith bring to the story that you wouldn’t experience if you just read the book?

Empathy for the mother and her twins.

I think this is a perfect title for this book!!

Yes, want a good mystery that will keep you guessing?? Try this one!

Enjoyed the book all the way to the end. There are many twists and turns that keep you guess all the way to the end. Twins are left orphans by a serial killer who gets out of prison after 30 years. Their grandfather who raised the twins is in the hospital and in a coma. Janie is a photographer for the local police and Jack is the district attorney. Both are hands on w/ the law, both would do anything for each other. The father is sticking to his story that he was not the serial killer, that here was someone else in the house the night the twins mother was killed. The narration was excellent, well done Emily Sutton-Smith. If you like mystery how done it books you will enjoy this one.

A very good read... Deviously plotted w/ deft twists... The underlying mystery keeps you guessing, and the climax is a serious gotcha... Good characters and above average narration... Good luck trying to figure it out, it took me until the last couple hours of the book to put everything together, and that was w/ some serious exercising of the deductive... Bought it on sale, but woulda been worth a credit w/o a doubt...

Interesting but not quite gripping thriller

Interesting but not quite gripping thriller. Store and pace were good but somewhat predictable. Narration was great! Worth the read.