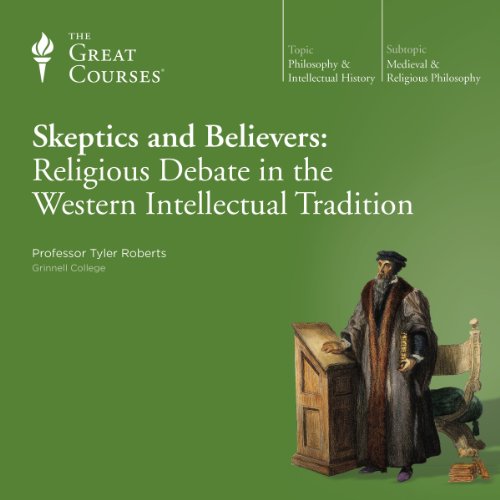 Skeptics and Believers: Religious Debate in the Western Intellectual Tradition

Skeptics and Believers: Religious Debate in the Western Intellectual Tradition

Beginning in the 16th century, the Protestant Reformation and the Scientific Revolution began to erode the position of authority. As a result, new philosophers began constructing a universal rationality independent of faith. This schism fundamentally changed the course of Western civilization, and it has had consequences that remain with us to this day. This 36-lecture journey will help you understand exactly what the debate has been and will continue to be about.

By gaining a richer understanding of the debate's key aspects - including the nature of the conflict, the meaning of the arguments, and what is at stake both philosophically and theologically - you can add significantly to the level of sophistication you already bring to one of today's most far-reaching issues and increase your understanding of both our past and the direction of our future.

These lectures examine more than three centuries of debate in the Western world about the nature of religious faith and its compatibility with reason. Drawing on some of Western civilization's greatest theological and philosophical minds, Professor Roberts even-handedly follows and analyzes the arguments of a broad range of skeptics and believers, including the likes of Thomas Aquinas, Karl Marx, Sigmund Freud, Daniel Dennett, Martin Luther, Immanuel Kant, Soren Kierkegaard, and many others.In addition, these lectures maintain the sense of a true conversation across time, so that you'll never lose the thread of how one idea relates to another as he weaves a vast amount of material into a coherent whole that amounts to far more than the sum of its parts. The result is one of the most intellectually satisfying plunges into philosophical and theological thought you will ever take.

What listeners say about Skeptics and Believers: Religious Debate in the Western Intellectual Tradition

This was a really great course to have gone through. Such a wide range of coverage and no biase by the author. highly recommended for anyone looking at understanding different perspectives on religion. Well worth it!

Light on skeptics, heavy on believers

If you want a history of the debate between skeptics and believers told essentially from the believers' point of view, this lecture series does a good job. My impression is that Professor Roberts includes just enough of the skeptics to show how they affected the arguments of the believers. But if you're looking for a robust summation of Hume, Nietzsche, Marx, Freud, etc. presented with an emphasis equal to that given the other side, this is not it. In fact, I'd say it's at best 1/3 skeptics and 2/3 believers.

At the very least, the title of the series is misleading. It might have more appropriately been something like: "Religious Debates in the Western Intellectual Tradition: The Response of Believers to their Critics." But then, I would not have purchased it.

It's not that Prof. Roberts reinforced my own beliefs; he didn't. But he does provide atheists and theists alike fodder for grand cogitation. Fundamentalists, both religious and antitheist, beware.

Exceptional and challenging course of study.

Pragmstic and yet quite insightful; this study of modernity and religion finally helped me to come to a fuller understanding of the Christian Doctrines of the Trinity and the Incarnation.

Very stimulating series of lectures. covers a great deal of religious thought in a balanced way