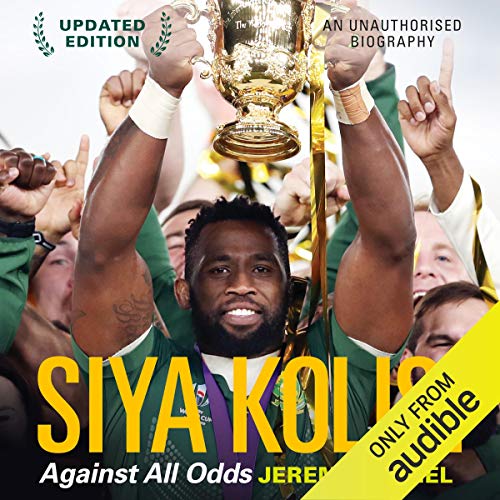 Siya Kolisi kept his emotions under wraps as he walked out into the roar of the stadium. It was the 26-year-old’s first game as Springbok captain. He let out a slow, controlled breath and clasped the hand of the young fan accompanying him onto the field.

As a boy, the odds were stacked against Siya Kolisi. Born into poverty in the township of Zwide near Port Elizabeth, he was raised by his grandmother as his mother was too young to cope and his father worked in Cape Town. Food was scarce, and he often went to bed hungry.

But Siya had one great passion: rugby. He would spend his free time playing for the African Bombers Club until, one day, he was offered a rugby scholarship to Grey High School. Thus began one of the most remarkable success stories in rugby history, one that culminated in his appointment as the first black Springbok captain.

Against All Odds traces Siya’s journey from a dusty township to the great arenas of international rugby. It is a remarkable story of grit and determination. From SA Schools matches to success with the Stormers and Western Province to the devastating lows brought on by injury, Siya just keeps on going. As Springbok captain, he carries the hopes of a rugby-mad nation. Hear about the journey, against all odds, of a great South African.

What listeners say about Siya Kolisi