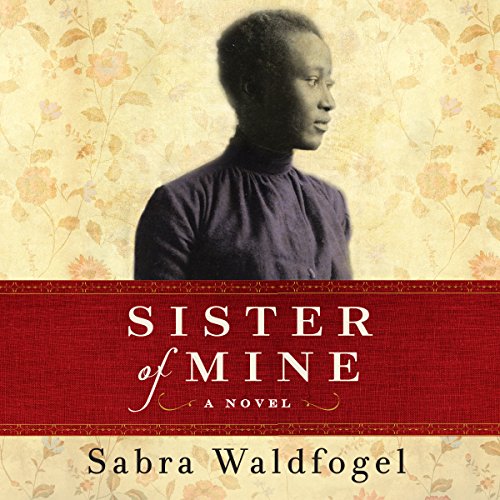 When two Union soldiers stumble onto a plantation in northern Georgia on a warm May day in 1864, the last thing they expect is to see the Union flag flying high - or to be greeted by a group of freed slaves and their Jewish mistress. Little do they know that this place has an unusual history.

Twelve years prior, Adelaide Mannheim - daughter of Mordecai, the only Jewish planter in the county - was given her own maid, a young slave named Rachel. The two became friends, and soon they discovered a secret: Mordecai was Rachel's father, too.

As the country moved toward war, Adelaide and Rachel struggled to navigate their newfound sisterhood - from love and resentment to betrayal and, ultimately, forgiveness.

Now, facing these Union soldiers as General Sherman advances nearer, their bond is put to the ultimate test. Will the plantation be spared? Or will everything they've lived for be lost?

An extraordinary book and totally engaging. a very convincing performance.
I hope someone turns it into a movie

Australians know little of the American Civil War and l found this a fascinating and very moving story. The writing was good, although Adelaide's character wasn't as well developed as l'd have liked. The performance was brilliant, really brought to life by such fabulous accents. The only failure was the scottish captain who ran the blockade for them.

This book is a treasure. I cannot begin to express my sincere appreciation and enjoyment in listening and being drawn into this tale that sent the echoes of a time past so gently into my being, fully and effortlessly. The narration is flawless!!! One of the best I've listened to.

Bought this audiobook for just $6.95 instead of using a credit, and really was not expecting too much, but was pleasantly surprised with both the narration and story. Bahni Turpin did a super job of bringing all the characters to life, and I could easily distinguish one voice from the other. Despite the audiobook being 17 hours long, the time passed quickly, probably because I was so emotionally invested in it. That is, I truly cared about the main characters, and wanted to find out exactly how they handled their difficult situations. It was one of those stories that will clearly keep you on the edge of your seat. I have listened to many historical fiction novels, but never have I heard about Jews owning slaves in antebellum America. This surprised me a lot, especially since Jews were once themselves slaves back in Egypt. I also liked that the focus was on the relationship between Adelaide and Rachel, and the bond they had as sisters as well as owner and servant. Throughout the story, we got to see how very complicated their relationship is, mostly because when it actually came down to it, first and foremost, they were family. I am extremely glad that by the end of the book, The author shows the characters as having experienced an incredible amount of personal growth. These women made some rash decisions, and in the process, hurt one another deeply, though still managed to become far better people along the way.Try this audiobook! You will not be disappointed!

If you could sum up Sister of Mine in three words, what would they be?

What other book might you compare Sister of Mine to and why?

It shares a concept with Marlen Suyapa Bodden's The Wedding Gift (which is also very good): two half-sisters, one a slave owner and the other her slave. But here, the slave owners are Jewish, a people with a history of enslavement themselves. This gave Ms. Waldfogel's story additional real-life gravitas.

When a certain character came home from the war because I rejoiced for the reunited couple.

Who was the most memorable character of Sister of Mine and why?

Rachel. Legally she is a slave, but she remains her own woman, uncowed by the terrible system in which she lives.

Bahni Turpin was excellent as always!

Would you try another book from Sabra Waldfogel and/or Bahni Turpin?

I thought the narration was good, but the actual content was very disappointing. I would not buy another book from this author. I was expecting historical fiction, and instead I got a romance novel with graphic sex scenes and an unrealistic story line.

I couldn't wait for this book to be over. I have never not finished a book I purchased, but this one came close. I found the characters irritating and inconsistent.

I enjoyed the listen because Bahni Turpin is an excellent narrator and I love her voice , and how she can portray any character from child to adult, male to female. The story was quite good in premise, but I didn't enjoy the intimately detailed sex scenes - in my opinion, they only detracted from an otherwise compelling story. And I found some of the characters inconsistent and frustrating. I returned this because I knew I would not give it a second listen.

Great book!!! I loved the story and the narrator. I was not ready for this book to end.

This was an amazing story. I usually listen to Christian historical fiction. This book contained very descriptive sex scenes, so I would not recommend for young readers.

Loved this book. Narrator was the best I have heard in a long time! Wonderful story!

I appreciate the story line here. Myself having 4 sisters and sometimes finding it hard to get along with them all the time, this teaches the true beauty of sisterhood. These 2 sister's survived and worked through horrible circumstances from outside and between themselves and still found love for each other. A beautiful story with lessons I plan to share and use in my own life.

A Little Slow, but Still Enjoyable

Although the storyline started a bit slow, I was eventually able to get into it and enjoy it. The love story was heartwarming even though the ramp up was protracted. I really enjoyed the intrigue at the end.

Story is awesome. I certainly did not expect the storyline to be so intense. A must read.

A must read. Wonderfully read and will keep you wanting to hear more right to the end.

What a fantastic book, beautifully read, it will be top of my list for best reads (listens) of this year, I'm so glad I picked it.

I loved this book. I didn't know much about the abolition of slavery and the American war.

I really Couldn’t listen to it. The accent got on my nerves. It seemed incredibly boring in the first two chapters

What a ‘read’...
Yes, 5 stars for each category well-deserved.
Bahni Turpin the icing on the cake. Her telling/acting of such humanity and horrific inhumanity is magnificent, sheer brilliance.
I recommend it 110%

A bit of a let down

Story starts with promise.
Author has a romantic view of the life of a slave.
A very disappointing end, with a unbelievable coming together of the relationships between the main characters.

Excellent novel.. true masterpiece and lived up to the excellent reviews of previous listeners.. strongly recommend..

I loved this story and was hooked by it. Brilliantly read, lyrical in narration. Thoroughly recommended

This book is absolutely brilliant, it’s got a bit of everything in it, that any keen reader of true to life events, will enjoy. We know from history, similar happenings did occur!!!. I highly recommend it, the narration is spoken to perfection. I couldn’t put it down. It’s a credit to the Authour. What a fantastic story too. It does not disappoint in anyway Thank you