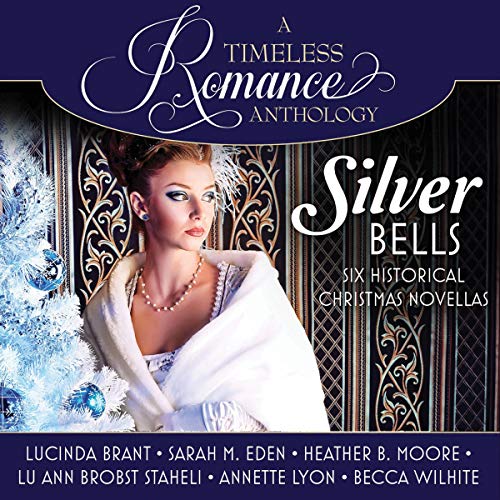 Six Award-Winning Authors have contributed new stories to A Timeless Romance Anthology: Silver Bells. Listeners will love this collection of six historical romance novellas, all centered around the Christmas season.

In NY Times & USA Today's bestselling author Lucinda Brant's delightful novella, Fairy Christmas, Kitty Aldershot is orphaned and forced to live on others' charity. Offered a home under the generous roof of her relatives, the Earl of Salt Hendon and his countess, Kitty wants for nothing, not even the affections of Mr. Tom Allenby.

Sarah M. Eden's charming novella A Christmas Promise, Sean Kirkpatrick is trying to get to his new place of employment, Kilkenny Castle, in order to start as the new stablehand. His only requirement is to drive a team of high-spirited nags from Dublin to Kilkenny in a certain amount of time. Unfortunately he winds up in a muddy field, stuck, lost, and running out of time. He's about to lose the job before he can prove himself capable of finishing his first assignment.

In Heather B. Moore's enchanting novella, Twelve Months, Lucien Baxter's best and most incorrigible friend, Will, dies unexpectedly, leaving behind his new bride and unborn child the week before Christmas. Will's last request is that Lucien watches over Cora, not just as a benefactor, but as a husband.

In Lu Ann Staheli's sweet novella, A Fezziwig Christmas, Dick Wilkins and his best friend Ebenezer Scrooge have been looking forward to the annual Fezziwig Christmas dance for weeks. Ebenezer is practically engaged to Annabelle Fezziwig, and Dick hopes to start courting her younger sister, Pricilla. Once the dance starts, and Pricilla arrives, as pretty and charming as ever, Dick discovers that he's not the only man vying for her attention.

A Taste of Home, a captivating romance by Annette Lyon, we meet Claire Jennings, who's on her way to spend Christmas with her family. As she rides the train with William Rhodes, who grew up across the street, memories of Christmases past flood her mind. He may be twenty-one now, but she can't forget his torturous teasing from their school years. At the rail station, Claire discovers that her home is under quarantine because her little brother has measles. She's stuck in town, away from her family, on her favorite holiday.

Becca Wilhite's entrancing novella, My Modern Girl, follows Margie, who lands her dream job as a clerk at Macy's department store in New York City. Margie might be new in town, but she's determined to succeed and prove to Henry that moving to the city was the right decision. As the Christmas season approaches, Margie realizes that being a "modern girl" might not be all she had dreamed of and Henry might have more to offer than she ever imagined.

I really enjoyed these stories. They were each well narrarated and the story lines were well done.

5 Out of 6 Silver Bells Are Ringing

Five well written with good plots ring out for the short romance reads. Sarah Eden always excellent, however her Novella in this selection is in one of her Anthologies. Good book for short reading time or when your busy preparing for Christmas.

I loved each of the narrators. Their voice and styles matched each story so well. Sometimes after listening to an Audible I'm not sure if I loved the story because of the good narrator or the good writing. I enjoyed all the stories though Sarah Eden is always my favorite. Becca Wilhite always makes me laugh. I would definitely recommend this Audible version.

Did not finish anthology

I listened to only the first three books hoping they weren’t all Regency stories. They aren’t, but most are. I’m not a fan of Regency, so my favorite that I listened to was an Irish tale, titled A Christmas Promise. Still, I prefer my historical romance to be set in America. Since I borrowed this book for no additional cost (it is part of the Kindle Unlimited selections), I felt no obligation to finish the stories that are not in my preferred genre.

I have nothing negative to say about the various authors or narrators. So I gave this anthology a full five stars! I have enjoyed many of the other Timeless collections as well.

Overall, these stories were cute. I don't love historical books and some of the terminology I didn't understand. My favorite story was A Christmas Promise. The Irish accent of the narrator was great to listen to and the story was funny. I also liked Taste of Home because it was set in my home state and I got to recognize some of the places it mentioned. Nice book to get you in the Christmas spirit.

I loved them all! So enjoyable and fun to have 6 different stories to listen to!