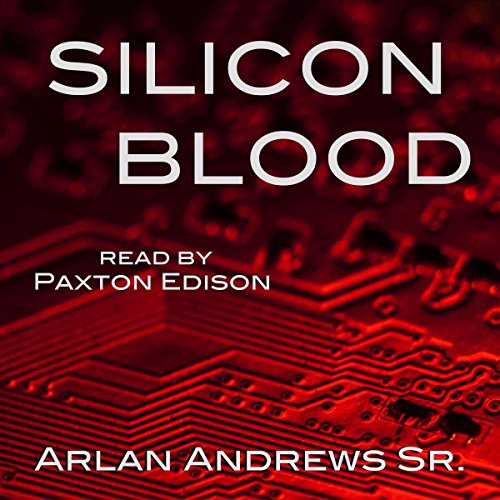 In the near future, the drug cartels of South America establish their own criminal nation, Cordillera, and proceed to flood the world with cocaine and political corruption. America responds by using the new science of nanotechnology to produce microscopic machines - “nanobots” - to eradicate such drugs once and for all. But these tiny devices can also be used to create new kinds of drugs inside a human body - a “pharm” - or to devour it from within.

After a catastrophic nano-plague, a new and powerful drug lord, El Hombre - “The Guy” - uses nanobots to set up a worldwide drug ring, harvesting new drugs from human bodies, and enforcing obedience with threats of devouring them.

Jerry Gade, a nano-engineer with a horrific secret, fights back. The struggle between Gade and "The Guy" takes place in both the human domain and in the invisible world of their own nano-creations. The outcome of their battle will determine the future of the human race.

What listeners say about Silicon Blood

I drive a lot and I am always looking for new books and authors to break the boredom. this book was great and filled the time nicely. I looked forward to getting back into the car every morning to continue the story.

Great story about promise and peril of nanotech

Loved listening to it during my commute. it gripped me pretty from the beginning, with a twist I never expected. I'll be looking for more from Arlan Andrews.

Really liked the concepts and the whole plot, only thing that kinda rubbed me the wrong way was the narrator's pronunciation of "the guy," but I can get over it. Great book all around.

Silicon Blood is a brutal, near-future hard sci-fi novel involving nano technology that can be tailored to suit just about any need, including being weaponized.

Arlan Andrew really delivers on the hard sci-fi aspect, providing in-depth and detailed descriptions of nano technology and its potential uses, both beneficial and harmful. The world he creates is both well thought out and frightening in the fact that it seems very possible.

However, there isn't a likeable character to be found. Even the hero Jerry Gade is a shallow, self-absorbed individual. The villains are largely one dimensional and unconvincing. They are no doubt brutally violent and psychotic, but amount to little more than petulant thugs who make cliché choices and mistakes (including evil monologue). Given how unlikable the good guys are, you really need a compelling villain to carry the story, and unfortunately there isn't one. I found myself largely apathetic to the characters and events, which is disappointing given the depth and detail of the world created.

Paxton Edison's narration left much be desired. The accents and voices he attempted fell flat, and every time he referred to the villain (The Guy) it sounded like he was doing air quotes.

Silicon Blood succeeds when it focuses on the technological aspects, providing a glimpse of an all too possible future. But unlikeable characters and uncompelling villains drag the plot down and make it difficult to care about what happens.

I received a copy of this book for free in exchange for an honest review.

Painful to listen to..

This Paxton Edison needs to find a another career. His narration was painful to my senses. The story? I think it might be a decent one-yet, I have no idea because of Mr Edison.