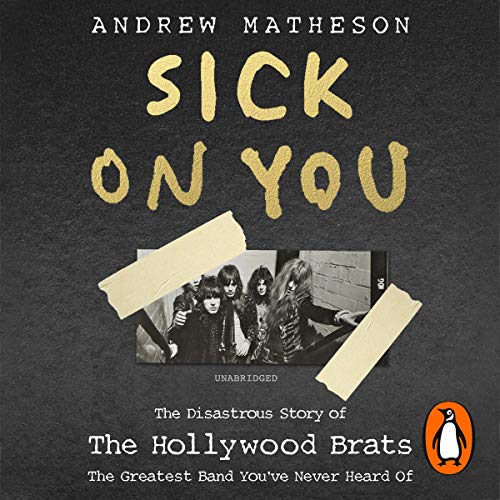 Mojo Magazine's book of the year.

The Hollywood Brats are the greatest band you've never heard of. Recording one near-perfect punk album in 1974, they were tragically ahead of their time.

With only a guitar, a tatty copy of Melody Maker and his template for the perfect band, Andrew Matheson set out, in 1971, to make musical history. His band, The Hollywood Brats, were prepunk prophets - uncompromising, ultrathin, wild, untamable and outrageous. But thrown into the crazy world of the 1970s London music scene, the Brats ultimately fell afoul of the crooks and heavies that ran it and an industry that just wasn't ready for them.

Directly inspiring the London SS, the Clash, Malcolm McLaren and the Sex Pistols, The Hollywood Brats imploded too soon to share the glory. Punk's answer to Withnail and I, Sick on You is a startling, funny and brilliantly entertaining period memoir about never quite achieving success, despite flying so close to greatness.

Go tumble with them

I first came across the Hollywood Brats when their album was re-released in the early 90s and loved it.

I wouldn't say it was like nothing I'd ever heard but that's only because everyone has "borrowed" from it or borrowed from those that had borrowed from it...

So while most other bios document the rise and fall (and sometimes their rise again) their tale of being before their time and taking pretty much every wrong turn is more like a plane struggling to get off the ground with occasional hops into the air that inevitably see them crash back down.

The whole tale of dodgy managers, promoters, gangsters and canal boats is told by Andrew Matheson, the lead singer and one of the main songwriters. He tells it like a the energetic and witty raconteur he is and never strays far from Tony Wilson's sage advice "if you have the option of printing the truth and printing the legend, print the legend".

This all adds up to a thoroughly entertaining romp through the under belly of the early 70s music world.

I must confess I had never heard of The Hollywood Brats and got this audiobook for its title and because I am a big fan of punk rock in the mid/late 70's and like finding out about how punk started.
This book is absolutely brilliant from start to finish, it has you cringing, laughing and most of all glued to the storyline.
Since listening to it I have been on YouTube and listened to some of the music, it's pretty good.
Also I have Some of The Boys early stuff and didn't realise "Sick on you" was a Brats song until near the end of book.
One of my favourite bits was when A couple of The Brats met Malcolm McClaren, Vivien Westwood and the early Sex Pistols along with Mick Jones and Tony James. Andrew Matheson's account of this time and hanging out with the London SS for a brief spell was absolutely hilarious.
The Hollywood Brats missed so many opportunities due to their disregard for anything and everything, they had the punk attitude that's for sure.
Thank you Andrew for sharing this experience, it was absolutely fantastic to listen to.

Should be a film!

I love the Hollywood Brats, just a bit too young to have seen them back in the day, discovered them through being a fan of The Boys.
Thank you Mr Matheson, this book, along with The Brats album have brought me much joy, many smiles & much other emotion. Hollywood Brats still keeping it real. Sick on you... what's not to love!

Actually , this is quite brilliant.

Nearly lost interest towards the beginning when we had some detail about musical instruments etc - I am not really excited by different types of guitar .

However, this is fabulously written - very poetic in places but rarely overdone. And the delivery,by the front man of the band itself, is exactly what you'd expect of someone who was clearly born to perform.

All in all, an uproarious adventure that I will long remember.

Hilarious, Mving and Quite Brilliant

If you could sum up Sick on You in three words, what would they be?

Just about everything - the story is moving and funny, infuriating in places, and just plain laugh out loud in others. Go find the LP after listening to this.

What does Andrew Matheson bring to the story that you wouldn’t experience if you had only read the book?

In this band, no one will hear you play

Simply one of the best audiobooks you will hear in a long time. The performance matches the story, which in turn matches the music. It take you back to 70s London and the squalor and struggle of trying to get on the musical map. Bravo Andrew and thank you!

Brilliant story made better by being true. Even though it has the word disastrous in the sub-title you still listen hoping they'll catch a break