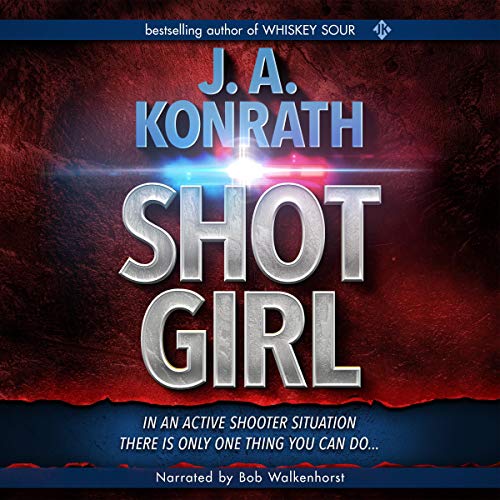 Jack is a retired cop who knows and respects firearms. A recent victim of gun violence, she is confined to a wheelchair, getting physical therapy in a rehab facility, and teaching handgun safety and Second Amendment history to the elderly residents.

A thousand miles away, a very disturbed individual with a modified 9mm pistol, a thousand rounds of ammo, and a singular obsession - to make history as the biggest mass murderer ever - decides to make that fantasy a reality.

Jack is about to find out if that's true.

SHOT GIRL by J.A. Konrath
America has 300 million guns. This is the story of one of them.

If you are a more sensitive (or adventurous) listener, this handy scale rates specific categories from 1 (lowest) to 10 (highest) to give you some idea if this is your kind of book.

What listeners say about Shot Girl

it took me almost a year to finish this book

I hate everything about this audible book. Horrible narration. An older writer trying to write how a Gen Z speaks. A hard ass bad ass cop feeling sorry for herself. I hate when you get vested in a series and as the series continues the storyline and writing gets worse. It's as if the writer is doing it for the money and has no new ideas or quests for these characters. I know there are about 3 books after this one in the series and I'm torn. Do I continue or count my losses?

not the best jack daniels story but good Segway. needs better narration the like books in the beginning.

This might be something for someone but overall I am more than a little disappointed. I feel that the performance would have been better with a female narrator.

Please fire this narrator and bring the old ones back!

The narration was dreadful. It was very hard to decipher who was talking because he didn’t bother to change voices. Please go back to the old narrators - they were great! The book was just ok. It wasn’t the fun Jack Daniels stories we are used to. Jack is really feeling sorry for herself in this one. Hope the old Jack is back for the next one.

I truly love the Jack Daniels series. Keep up with the good work. I will be reading the next book.