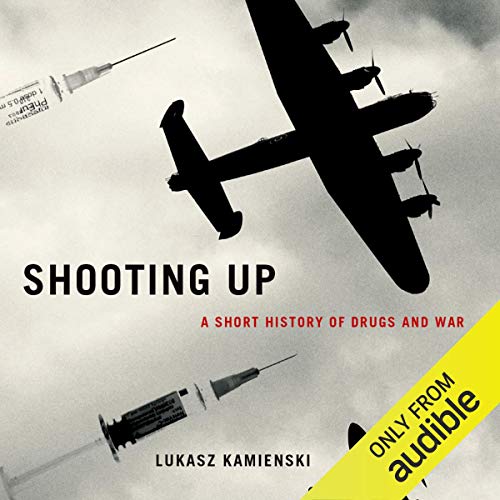 Shooting Up: A Short History of Drugs and War examines how intoxicants have been put to the service of states, empires, and their armies throughout history.

Since the beginning of organized combat, armed forces have prescribed drugs to their members for two general purposes: to enhance performance during combat and to counter the trauma of killing and witnessing violence after it is over. Stimulants (e.g. alcohol, cocaine, and amphetamines) have been used to temporarily create better soldiers by that improving stamina, overcoming sleeplessness, eliminating fatigue, and increasing fighting spirit. Downers (e.g. alcohol, opiates, morphine, heroin, marijuana, barbiturates) have also been useful in dealing with the soldier's greatest enemy - shattered nerves. Kamienski's focuses on drugs "prescribed" by military authorities, but also documents the widespread unauthorized consumption by soldiers themselves.

Combatants have always treated with various drugs and alcohol, mainly for recreational use and as a reward to themselves for enduring the constant tension of preparing for. Although not officially approved, such "self-medication" is often been quietly tolerated by commanders in so far as it did not affect combat effectiveness. This volume spans the history of combat from the use of opium, coca, and mushrooms in pre-modern warfare to the efforts of modern militaries, during the Cold War in particular, to design psychochemical offensive weapons that can be used to incapacitate rather than to kill the enemy. Along the way, Kamienski provides fascinating coverage of on the European adoption of hashish during Napolean's invasion of Egypt, opium use during the American Civil War, amphetamines in the Third Reich, and the use of narcotics to control child soldiers in the rebel militias of contemporary Africa.

What listeners say about Shooting Up

This is an excellent historical survey with a searing. take no prisoners, finish. We may be used to the idea that soldiers used "Dutch Courage" in WWI and for centuries previoously; that GI's in Vietnam used marijuana and heroin but, maybe, we are not so clear about the roles that the military. governments and pharmaceutical industries played in the distribution of drugs before and after the conflicts. This engaging work places the blame for the development and "abuse" of powerful drugs squarely on the shoulders of that triumvirate, where it belongs.

Although quite dense, this “short” History of drugs and warfare does cover a huge period of time and material. It reads a bit like a Thesis paper, at times sounding comically casual, while at other times using such verbosity of words and phrases (that add little or nothing to the content of line they create) that I wondered if the author was grasping to maximize word count. If you are willing to coast along the verbosity, however, there are brilliant nuggets that make the novel worth reading. I should also mention: The novel, in defining the patterns and practices of war, is quite depressing (you may need an anti-depressant when you’re done!).

Not Entirely Certain What To Make Of This Book.

Although I can’t say I liked it, I also can’t say that it was a complete waste of time.

I listened to this Audible production over the course of 2 or 3 days. And while the performance was annoying, at least to me, I could see what the author was attempting. I would have been happier, however if the author hadn’t injected his work with such a high dose of moralistic commentary. I prefer my history recounted more objectively, so that if any conclusions are to be drawn from the subject under consideration, I would like to think that I was capable of making up my own mind about them.

The last few years I’ve been reading or listening to a great deal of history, especially military history and specifically that of the 20th century’s. So I’ve become familiar with some of the material covered in this book. Very little of which I hadn’t come across in one form or another before. Shooting Up started off reasonably well, the author did his homework, but quickly becomes repetitive. The book could have covered the same area of ground in half the time. I would have sacrificed some of that repetition for a little more depth of treatment.

In the last chapter, the author tries to shrink-wrap his book in a thin veneer of profundity about the act of war being itself a drug to those who wage it. This stab at deep thinking doesn’t seem to me to work out very satisfactorily, in fact falls just short of banality.

Still, it might be worth your time, if you’re not familiar with the material and have an interest in the subject.

Gave me insight into war that in retrospect seems so obvious, ie the importance of drugs for managing human behaviour.
Would thoroughly recommend. Ex army friend of mine commented that almost all war history books fail to mention this important factor in war, which is as true now as it was 2000 years ago.