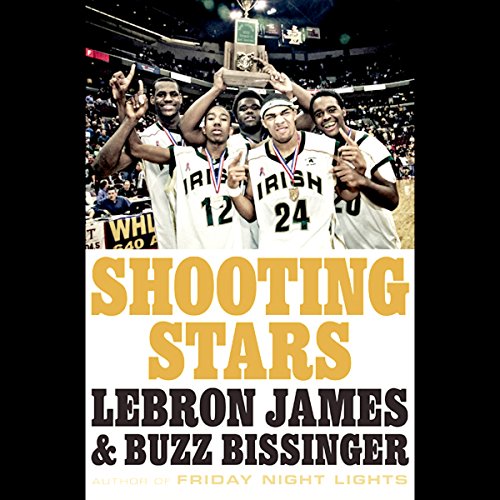 From the ultimate team - basketball superstar LeBron James and Buzz Bissinger, Pulitzer Prize - winning author of Friday Night Lights and Three Nights in August - a poignant, thrilling tale of the power of teamwork to transform young lives, including James's own.

The Shooting Stars were a bunch of kids - LeBron James and his best friends - from Akron, Ohio, who first met on a youth basketball team of the same name when they were 10 and 11 years old. United by their love of the game and their yearning for companionship, they quickly forged a bond that would carry them through thick and thin (a lot of thin) and, at last, to a national championship in their senior year of high school.

They were a motley group who faced challenges all too typical of inner-city America. LeBron grew up without a father and had moved with his mother more than a dozen times by the age of 10. Willie McGee, the quiet one, had left both his parents behind in Chicago to be raised by his older brother in Akron. Dru Joyce was outspoken, and his dad was ever present; he would end up coaching all five of the boys in high school.

In the summer after seventh grade, the Shooting Stars tasted glory when they qualified for a national championship tournament in Memphis. But they lost their focus and had to go home early. They promised one another they would stay together and do whatever it took to win a national title.They had no idea how hard it would be to pursue that promise.

In the years that followed, they would endure jealousy, hostility, exploitation, resentment from the black community (because they went to a "white" high school), and the consequences of their own overconfidence.

Not least, they would all have to wrestle with LeBron's outsize success, which brought too much attention and even a whiff of scandal their way. But together they became men, and together they claimed the prize they had fought for all those years - a national championship.

"When I first saw LeBron James play as a professional, it was his selflessness that dazzled me the most. After reading Shooting Stars, I now understand why. It is a book of five boys coming together to learn the true meaning of teamwork and togetherness, loyalty and love, through highs and lows and thick and thin. It is a book filled with excitement and unforgettable characters. It is a book that will incredibly move and inspire you." (Jay-Z)
"A heartwarming story of boys who became men, teammates who became brothers, players who became champions, wonderfully told through the maturing eyes of basketball's greatest star." (John Grisham)
"Reading about LeBron James' transition from boyhood to manhood was a thrill for me. Shooting Stars is a remarkable and riveting story, filled with lessons of life we can all learn from." (Warren Buffett)

What listeners say about Shooting Stars