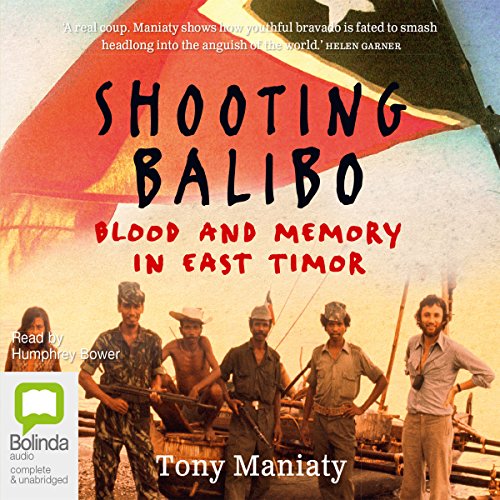 Humphrey Brower’s accomplished, animated performance expertly captures the unique amalgam of nostalgia, poignancy, and hard-nosed realism of Australian journalist Tony Maniaty’s gripping memoir about his return to East Timor, or as he calls it, "the craziest little country in the world", with a film crew that is turning the events he endured in 1975, when he witnessed the brutal killing of fellow journalists at the hands of the Indonesian military, into a feature film. An oftentimes chilling but irresistibly compelling listen.

Thirty years after he was there with the Balibo Five, Tony Maniaty returns to East Timor to lay his ghosts to rest, in a beautifully written memoir.

When foreign correspondent Tony Maniaty goes back to Timor for the first time since he fled for his life 30 years before, he discovers a land of ghosts - some he left behind, and some he's brought with him. He's there to watch five young actors play out the last days of five friends of his - men who were murdered by the Indonesian army in one of the most infamous incidents (and cover-ups) in Australian foreign affairs. He's also there to talk to some friends who survived - Gusmao, Ramos-Horta - people he knew as guerillas and who now run the country.

When he arrives, past and present, fiction and fact begin to overlap: at the Hotel Turismo he's assigned room 11 - the room he had in 1975. And, he later discovers, the room the actor playing his young self had been staying in. Old contacts appear out of the jungle, and disappear into rooms of state. But the most harrowing overlap is when he watches five young men being taken into a shack on the outskirts of Balibo, towards death.

What listeners say about Shooting Balibo

I would recommend if they didn't know anything about the subject

Not that bad...deserves more than one star.

It is a very boring book, badly sequenced,
I could not listen more than half before throwing it out .. Sorry for being so frank