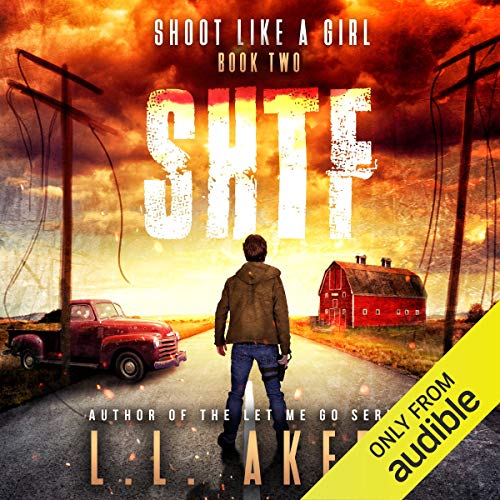 Would your neighborhood work together to survive if the s--t hit the fan?

More chaos erupts in book two of the SHTF series when the lights don't come back on and there's still no word - or help - from the government. Tullymore is divided, and on the brink of an internal war. Tensions only rise further when one innocent life is on the line, and they must make a deadly trip into town to scavenge for a crucial supply that someone may have had all along.

Do you bring enough to the table to join a stronger group?

On the homestead, Jenny is a shocking surprise to everyone, and Puck is feeling as though he must stand up and be a man to prove his mettle to the group in order to stay. But there might not be the safest place to be, after all.

A map to the farm is lost - and found - by the worst possible people. Now, they have more to fear than just dehydration and starvation.

Elmer mounts his tractor and attempts to return home to his dear wife, Edith. But when pop goes the weasel, he's not the only one surprised by what lies ahead on the road.

Bullets and blood are the new currency, and death is imminent unless they can all learn to Shoot Like a Girl in book two of The SHTF Series, a post-apocalyptic thriller.

Book 2 OMG was wonderful!!!! My heart broke for the baby and Edith. I got the heebie jeebies every time Trunk's name was mentioned. I think you are going to have to write 8 more books to develop each of these characters, and I would look forward to each one of them. I love that you can see just because you are prepared does not mean things are going to turn out all perfect for you. I look forward to book 3. Not to be pushy....PLEASE Hurry!!!
Again Kevin Pierce was wonderful!!!

I loved this second book as much as the first! I look so forward to the third book coming out!! Like most, I am not an Olivia fan, at all. You did WHAT with our supplies?? Ughh!

Frustrating and lack of common sense

The reluctance to deal with the situation at hand by many characters is beyond frustrating. Several other authors are better IMHO.

I have tried to listen to this series and find it too MAD MAX and no very realistic. The TWO biker gang on a scavenger hunt is not very realistic. After book 3, I quit.
God help us if SHTF ends up like this.

PS my wife likes it though.

loved it, cant wait for book 3

surviving thru it all

Oh how frustrating are some characters who must always learn everything the hard way! Excellent sequel to the first book, LL Akers has me waiting for more.

great story, and great character development. Can't wait to start the next one. keep them coming.

Even better than the first. Loved the end.

I am hungry for more. This author and this series keeps getting better. The pacing is solid, the chacters are appealing (except olivia :) and the situations are plausible. Way to go Lisa !

Action packed from start to finish

Well I looked forward to this book after listening to the first in the series, and I was definitely not disappointed!
From the first chapter to the last, this story followed the protagonists, and a few new characters, through hell and high water, and back again. There were a few happy, sweet, moments too, but for the most part, this book gave us a glimpse of what could actually happen were we to find ourselves in this kind of apocalyptic world. The author has not shied away from taboo subjects, nor from using our emotions and fears to heighten the anticipation of the next chapter. Once again I listened to this book almost completely from start to finish. It is just that good, and there is too much at stake for our favourite characters, to wait too long to find out their fates.
I received this book as a free gift, and I have left my review entirely voluntarily.
Eagerly anticipating book 3....

I loved this book, Grayson's family are entertaining, and Grayson has the patience of a saint, Olivia is a bit of a special snow flake, it's worth reading to find out she'll do next! I received this book in exchange for my honest review.