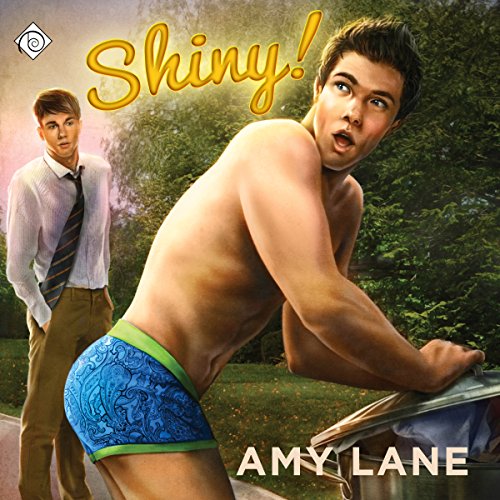 Will Lafferty and Kenny Scalia are both having sort of a day. Will gets fired for letting fifth graders read Harry Potter, and Kenny finds his boyfriend and his sex toys in bed with a complete stranger. When Will knocks over Kenny's trash can-and strews Kenny's personal business all over the street-it feels like the perfect craptastic climax to the sewage of suckage that has rained down on them both.

But ever-friendly, ever-kind Will asks snarky Kenny out for a beer-God knows they both need one-and two amazing things occur: Kenny discovers talking to Will might be the best form of intercourse ever, and Will discovers he's gay.

Their unlikely friendship seems like the perfect platonic match until Will reveals how very much more he's been feeling for Kenny almost since the beginning. But Kenny's worried. Will's newfound sexuality is bright and glittery and shiny, but what happens when that wears off? Is Will's infatuation with Kenny strong enough to stay real?

What listeners say about Shiny!

Made me laugh out loud!

What did you love best about Shiny!?

Tyler Stevens did a wonderful job in his characterizations! It was a sweet refreshing story by Amy Lane. I love that lady, what a great author!

What other book might you compare Shiny! to and why?

Maybe superhero by Eli Easton or any book by Lane Hayes.

What does Tyler Stevens bring to the story that you wouldn’t experience if you just read the book?

His voices were hilarious! He did a great job!

Who was the most memorable character of Shiny! and why?

Great story, Great narration, you will not be disappointed!

A happy story from the queen of angst

Amy Lane is known for her angst. This book has almost none! This is a very sweet and happy book about Will coming to grips with his sexuality and falling in love with Kenny. Until he met Kenny, Will just never thought of himself as a sexual being. He’s very naïve (he gets kicked out of a Christian school for teaching the kids Harry Potter) and he’s a big, bulky, but gentle, dork.
Kenny is an overachiever and workaholic, always dressed to the nines, who is working so hard he doesn’t realize his live-in boyfriend is cheating on him – a lot! When he figures it out he throws away everything they may have used together – which means an entire drawer full of shiny, gaudy, outrageous sex toys and puts them in a box on top of his garbage can.
Will bumps into this garbage can and is attracted to the shiny objects. Later, he’s shocked when Kenny explains what the objects are. This starts their improbable relationship. Kenny drops some hints and then later some porn and dildos into Will’s lap hoping to trap that mythical beast “the straight guy who doesn’t know he’s actually gay”! When the trap is laid, Will stumbles into it head first and WOW is he surprised at what he finds out!
The rest of the story is a mix of Will exploring his sexuality and the developing friendship and work relationship Will and Kenny have and then later their coming together as friends turned lovers. There are some doubts – is Will just with Kenny because he’s his first or is it real? Where will Will work? What about Kenny’s being on the rebound? However… For those of us who love a sappy ending – the ending of Shiny will knock your socks off!
The secondary characters in Shiny are also great – Aunt Cara- the lesbian bride, Will’s mom – trapped in the 1960s, Kenny’s ex – the big, dumb cheater and Kenny’s ultra liberal family - trying so hard not to judge Will.
In the audio format Tyler Stevens does another absolutely amazing job. He does swishy voices fantastically and I adore his female voices as well. Tyler “gets” what he’s reading, so he’s able to really give some good “performances” and add emotion to the dialog.
I am a huge Amy Lane fan, I also look for Tyler Stevens as a narrator, so together they make a dream team! This is one of those times where the narration adds to the story and makes it even better. I highly recommend this audiobook.

What a fabulous way to tell a story! Funny, romantic, funny, sweet, funny!

I thought it was really nice and sweet. I loved the narration and overall feel of the book. It's definitely worth a listen!

all I can say is I want more!!! I want more from chase, tommy, dex, kane and all the rest of the guys from Johnny's.

My second Amy Lane...why have I waited so long?

Would you listen to Shiny! again? Why?

Yes, it was fun and sexy. An enjoyable listen.

I really loved Will. He was just a big guy who hadn't realized what he wanted, and when he did, he was all in.

What does Tyler Stevens bring to the story that you wouldn’t experience if you just read the book?

He had good range of voices, so I knew who was "talking" by the voices.

I loved their dance at the wedding, time to get back together, etc. **SPOILER** And of course, the romantic proposal, with the extra item added. :)

I need to get more Amy Lane ASAP!

Sweet and funny, Amy Lane's Shiny is an opposites attract romance with a first-time-gay twist.

Poor Will thinks he's asexual as his experiences with women have done nothing for him. (As in "don't worry, it happens to all men" kind of cold - ouch.)

Poor Kenny whose cheating boyfriend has left him soured on men in general - but sweetly, clueless (STRAIGHT) Will makes an excellent friend.

Watching these two come together is adorable, and I love the way the whole thing is told as a story.

Tyler Stevens does a wonderful job narrating this one, I love his voice and he can read to me any time.

I love the meet cute! it is one of the best I've ever read. Also, I love the nerdiness.

It's been awhile since I've taken a chance on an Amy Lane audio book. The last was a DNF for me. But in Shiny, she knocked it out of the park!
Maybe it's just a matter of pairing the right narrator with the right author. Amy Lane and Tyler Stevens make a perfect partnership in Shiny. Tyler really brings all the characters out wonderfully. And when you find a narrator who can actually make a sex scene sound like a sex scene instead of a reading of how to change your car oil, you just gotta love that narrator.

I bought this because I really enjoyed The Locker Room and thought this would be good too. That book was angsty and very hot. The story here did not interest me and I prefer my m/m characters to be more "manly", so Kenny drove me crazy and there was very little steam. I was disappointed with this one and I'm a little gun shy now about her other stuff.