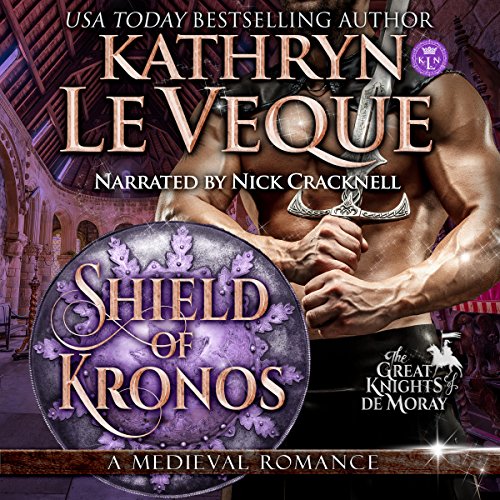 A decorated knight for Richard the Lionheart and an ally of the House of de Lohr, Sir Garret de Moray was a man described as cold, intimidating, foreboding. A man with eyes as black as night.

Receiving a royal appointment as Captain of the Household Guard, there was no man more qualified or prepared for the role because on the sands of the Holy Land where Garret went on Richard’s great quest, the Christian armies whispered of a knight whose wisdom was ancient. Some wondered if he was the walking dead, an immortal soul who had lived many lifetimes over, because his skill and power exceeded earthly restraints. Kronos, they called him. The father of the gods.

Then came a lady without hope…

Beautiful Lyssia du Bose has lost everything – her father, her home, her family. Taken in by an aunt who was a lady-in-waiting for the Duchess of Wendover, Lyssia finds a quiet existence in the shadows of a great home. A chance meeting with a warrior with eyes as black as night and, suddenly, her perspective on life begins to change. The quiet, sometimes-frightening knight took an interest in her, and she in him. Is it possible that someone should actually want her?

More than she knows. When Lyssia catches the Duke of Wendover’s attention as well, the gentle romance between her and Garret quickly becomes something they must fight to hold on to. When Garret, one of the most powerful knights in King Richard’s stable, is challenged by a married duke who wishes to make Lyssia his mistress, it is a battle that all of London will witness.

This one did not disappoint me one little bit! Nick Cracknell did a splendid job narrating it! This is my first time listening to him. I couldn’t stop listening to it!

I didn’t want it to end! The narrator did an excellent job with the different character voices.

He risked all for love

I like that the hero was aided in his quest for Justice by the Wife of the villain.

Kathryn Le Veque has done a fabulous job with this new book. Each time I read one of her books I’m looking forward to the next one. I absolutely love when it along story because sometimes I’m disappointed that it’s over.
I see a lot of her new books one amazon but I can’t get them because I need audible books.

Shields Of Kronos is a great listen

I have started listening to this story on my Kindle Fire. I am hooked on historical romances by Kathryn LeVeQue.She one of the best I have read/listens. She racks up there with Nora Roberts, Cassie Edwards, Heather Graham and other great historical romance novelists.

Love this narrator. Did such a great job.
More than the usual amount of politics machinations for a leveque novel, which aren’t my favorite but tie up nicely in the end. Fast paced, Kronos was a great nickname, and Zion is a great addition to the story.

I loved the book, the strength and tenderness of the hero and the sweetness of the heroine .....fast moving story doesn't make you dull... , a must read!

I thoroughly enjoyed this knight’s tale. The story moved along at a consistent pace realistic with its emotions and a cast of characters that enriched the story. I just wish a female could read the female role. I find it disconcerting to hear a male trying to imitate a feminine tone.

Normally I love Kathryn’s stories. This was an ok listen. Not Kathryn’s best but not terrible. I’m a little disappointed.

It felt too forced. Oh well.

Enjoyable but spoiled by an abrupt ending

I really enjoy KLV's medieval stories. She does a wonderful job of world building and is able to create characters that you really care about. However, on this occasion I was left going 'is that it?'.

I won't give any spoilers, but after the villain is beaten, everything is wrapped up in just a few pages. Garrett and Lyssa don't even have a proper conversation, let alone any description of the aftermath of what they'd been through!