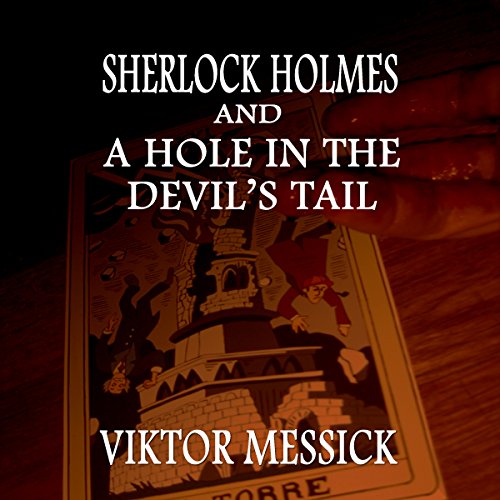 Sherlock Holmes and a Hole in the Devil's Tail

Sherlock Holmes and a Hole in the Devil's Tail

Holmes and Watson are handed the challenge of solving the London Tarot Murders, a dark episode which, to quote Dr. Watson's in his memoirs, "occupies a lofty place in the annals of all black deeds ever committed in the long memory of the ancient, regal city, higher even than the infamous affair with the Ripper."

Some fiend is brutally murdering random people in Lower Havering and pinning cards from the Italian deck upon their faces. And this string of killings appears to have some relation to the strange, unsolved slaying of the renowned solicitor Richard Corkright in his cozy, secure Merton office. The gauntlet is thrown down, and Holmes, at great risk to both himself and his faithful chronicler, snatches it up. But what price will the two valiant men pay for meddling in the affairs of the sinister Tarot Master?

Sherlock OK But Missed the Mark

An OK edition to my Sherlock condition. However, I feel the author Viktor Messick missed the mark and truly capturing the voice of Watson and Holmes. This Holmes is more condescending than Doyle's and I will be honest the author drones on and on when Holmes is talking. I really wanted to like this more. The premise is fascinating a killer who pins tarot cards to their victims, however the execution was lacking in this novel.

There were two parts that lines that were repeated; I don't think this takes away from the novel, but does show a lack of editing.

The narrator Kevin Theis is amazing, and I actually picked up the book solely on his performance in Ian Shimwell's works.

A twisted alleyway, a murder in the office, and Sherlock to figure out how.A murder, but how the killer got in and out. His calling of leaving a tarot card. Given audio for my voluntary review and my honest opinion. Found narration was good.

I received a free copy of this audio book at my own request and voluntarily leave this honest review.
Great narration.
And a good tale well told . As a Holmes fan I found this to be really good.