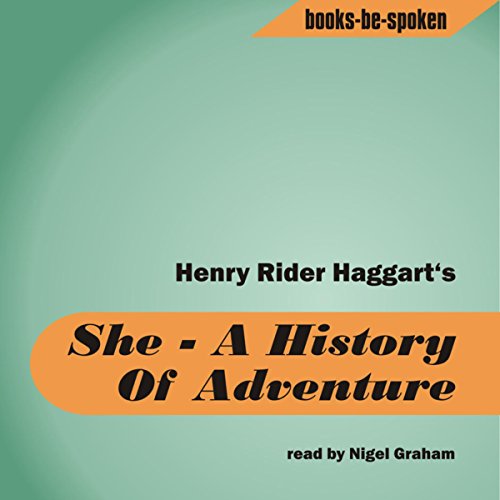 Leo Vincey, a beautiful young man with the looks of a Greek and his fatherly guardian Holly, a Cambridge scientist, go to Africa to avenge the death of a supposed ancestor of Leo, named Kallikrates. Travelling across volcanic plains and marshes, they finally got confronted with the She-Who-Must-Be-Obeyed queen Ayesha. The adventures, supernatural and mythical experiences of Leo and Holly, and above all the description of the archetypal goddess Ayesha make the story a remarkable one.

Henry Rider Haggard was born on June 22, 1856 in West Bradenham Hall, Norfolk. In 1875, he went to South Africa as secretary to the governor of Natal. The writer also served on several government commissions concerning agriculture and was knighted in 1912 and 1919 for these services.Haggard’s outstanding powers of imagination secure him a high rank in prose literature. He died in London on May 14, 1925.

Hayward Morse has appeared in innumerable stage, radio, TV and film productions in the United States, Britain, Canada and Europe. Successfully working at London's West End, he later received a Tony award nomination for his performance in "Butley" on Broadway. Very experienced with recording Audio Books, Heyward Morse shows his theatrical grandeur in playing different characters, credibly and most impressingly.

Please note: This audiobook is in English.

What listeners say about She

Not much else to say. If you are a fan of classic adventure writers like Robert E. Howard and Edgar Rice Burroughs, then H. Rider Haggard's She is a requirement.

Though written at a time when certain ethics and descriptors could be questioned by modern day view points, the story still remains a classic with a wonderful 'colourful' language from a bygone age.