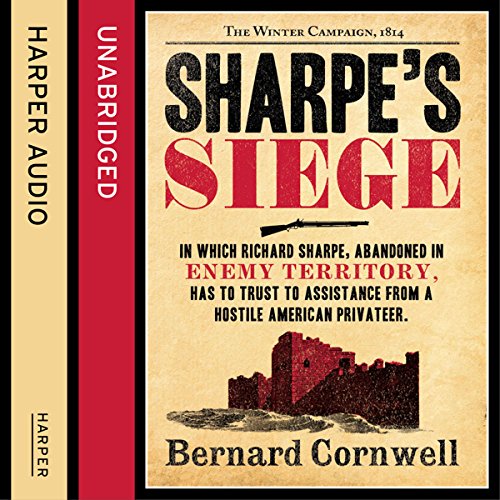 "Cornwell's narration is quite masterly and supremely well-researched." ( Observer)

Richard Sharpe, abandoned in enemy territory, has to trust in assistance from a hostile American privateer.

The invasion of France is under way and the British Navy has called upon the services of Major Richard Sharpe. He and a small force of riflemen are to capture a fortress and secure a landing on the French coast - one of the most dangerous missions of his career.

Through the reckless incompetence of a naval commander, Sharpe finds himself abandoned in the heart of enemy territory, facing overwhelming forces and the very real prospect of defeat. He has no choice but to trust his fortunes to an American privateer - a man who has no love for the British invaders.

Soldier, hero, rogue - Sharpe is the man you always want on your side. Born in poverty, he joined the army to escape jail and climbed the ranks by sheer brutal courage. He knows no other family than the regiment of the 95th Rifles whose green jacket he proudly wears.

I was recommended the Sharpe series by a friend at the start of the year. It has been a real blessing in my life and I feel slightly saddened that there's only 2 or 3 more books to go. Thoroughly brilliant stories and the narrator adds SO much value. His name is Rupert Farley and what a talent he is, so much so that I wrote to him recently to congratulate him on his work in this series. Particularly good at the accents of the various characters. Listen to the series from book 1, you will love it. Well done to the author and narrator. Dr. A

This novel is, apparently, the favourite of the author, and while very good, is certainly not the best of the series. As always, Rupert Farley is brilliant, giving voice to Cornwell's characters, though it is probably the story which somehow does not quite match the usual heights of the others. Still worthwhile, please give it a listen!

A very good narration of a very good book . Th pace of the narration and the gusto was excellent.

Another cracking yarn from Mr C.

Full of the brutality, bravado and bravery you come to expect from a Sharpe story Sharpe's siege leads us through a merry dance of misadventure and betrayal before throwing us into a desperate fight for survival behind enemy lines. A compelling listen read with a full voice cast from the excellent Richard Farley. Corking.

Excellent story one of the best in the series. Rupert Farley reads fantastic giving all the characters real personality's!

Superb narration of a great story

Cornwell tells in vivid detail a great story, I have now read nearly all the Sharpe's books & I am never disappointed.
You always feel you are, in the middle of the battle. Rupert Farley really helps the story come alive, with his different voices.
I am always amazed at his detail & his knowledge of the history the story's are built around. Fantastic!!

Farley is superb as always. The tension during the siege and final retreat had my knuckles white. Five accents in one conversation - Farley is a master