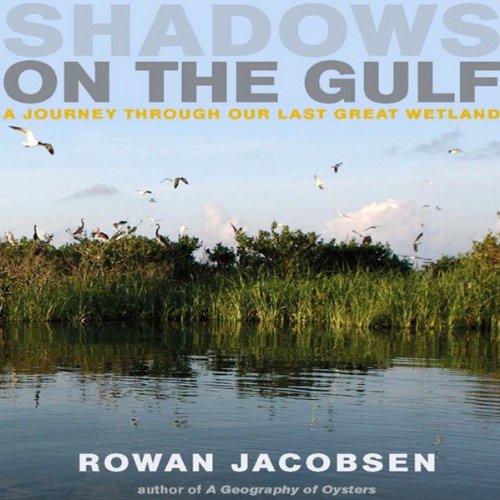 Shadows on the Gulf

In the spring of 2010, as we watched oil gushing unstoppably into the waters of the Gulf of Mexico, many Americans turned their focus to the region for the first time, wondering how this could happen and demanding corporate and government accountability. Yet Rowan Jacobsen brings a surprising perspective to the tragedy: as bad as the spill was, it is only the latest chapter in a century-long story of destruction. At the height of BP's dispersant madness, the amount sprayed each day merely equaled the amount of dispersant that washes down the Mississippi from the Heartland's dishwashers and washing machines. Coastal drilling has damaged the region's ecology far more than offshore drilling. And the acres of marshland ruined by oil slicks can't compare to the amount that disappears in every hurricane, due to the work of the Army Corps of Engineers. Southern Louisiana is subsiding. Even if we succeed in restoring every mile of beach and wetland from the oil spill, the entire Mississippi Delta could be lost this century, and New Orleans will sink beneath the waves, an American Atlantis.

Surveying the Gulf Coast by sailboat, skiff, car, and kayak, Jacobsen journeys from the bayous of Terrebonne Parish, where he goes on oil patrol with a Native American man whose tribe is being displaced as their island disintegrates; to the last shucking house in New Orleans's French Quarter, whose oyster supply has vanished; to the pristine barrier islands of Mississippi, where a Kafkaesque cleanup effort is underway. He discovers a little-appreciated ecological wonder of breathtaking natural beauty and rich culture struggling to hold on to the things that have always sustained it.

Shadows on the Gulf details the catastrophe creeping across the region and reveals why the damage to the Gulf will affect us all. Not only are the Gulf's wetlands the best oyster reefs and fish nurseries in the world, they also provide critical habitat to most of America's migratory songbirds and waterfowl. If the Gulf is allowed to fail, the effects will ripple across America. And fail it will, unless BP's blunder can somehow galvanize a national effort to save it.

"A sensitive and elegant amble through both a tragedy and an ecosystem. Required reading for anyone trying to understand the Gulf in its entirety." (Paul Greenberg, author of Four Fish)
"Brimming with engaging information about a little-known region and leavened with moments of grace...Rowan Jacobsen succeeds in painting the 'sort of cubist portrait of a beautiful and sometimes contradictory region' he envisioned. And this fragmented portrait turns out to be all the more beautiful and melancholy for being accompanied by the persistent, doleful sounds of a pipe organ." (Wall Street Journal)

What listeners say about Shadows on the Gulf

Would you listen to Shadows on the Gulf again? Why?

yes, there is so much information provided I plan on listening to it twice

What other book might you compare Shadows on the Gulf to and why?

Its all comprehensive and interesting

that all the worlds eels breed in one place.
The layered dysfunction and bureaucracy that lead to the deepwater horizon disaster.