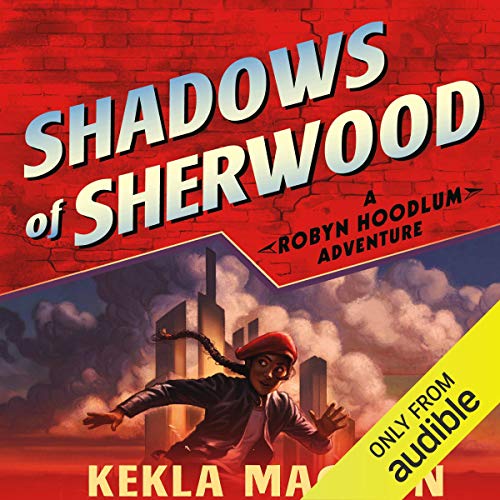 The night her parents disappear, 12-year-old Robyn Loxley must learn to fend for herself. Her home, Nott City, has been taken over by a harsh governor, Ignomus Crown. After fleeing for her life, Robyn has no choice but to join a band of strangers - misfit kids, each with their own special talent for mischief. Setting out to right the wrongs of Crown's merciless government, they take their outlaw status in stride. But Robyn can't rest until she finds her parents. As she pieces together clues from the night they disappeared, Robyn learns that her destiny is tied to the future of Nott City in ways she never expected. Kicking off a new series with an unforgettable heroine, listeners will be treated to feats of courage and daring deeds as Robyn and her band find their way in this cruel new world.

What listeners say about Shadows of Sherwood

This book was one of the choices on my daughter's summer reading list for middle school. I started listening as well so we could talk about it. I got hooked very quickly. It reminded me of a younger version of Robin Hood or the Hunger Games series-how one person can make a difference. I would definitely recommend it to others. I look forward to reading book 2 now to find out what happens next.

narrator is terrific. The story is very engaging

I loved this book. it was very engaging. I fell in love with the plot.