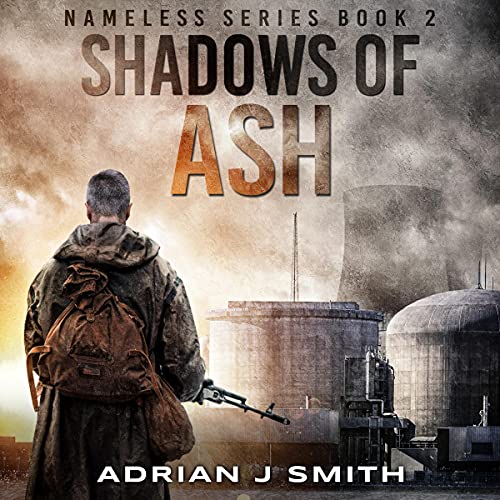 To survive hell, you must make a deal with the devil....

In the aftermath of a global catastrophe that has killed billions, old enemies become allies in order to survive. When Ryan Connors and his former recon team, the Nameless, form an alliance with the Yakuza, they learn of a new plot that could lead to countless more deaths. Armed with this knowledge, and driven by revenge, Ryan and his team launch a desperate bid to stop OPIS from executing their plans to destroy the world.

In America, prisoner Zanzi Connors is offered a way out and a chance to find her father and join the fight. But her freedom comes at a cost, forcing her to do something that goes against everything she believes - take another life.

Like father, like daughter, even though they are separated by fate, Ryan and Zanzi are bonded by a common mission to save humanity - no matter what the personal cost, even if it means their own lives.

What listeners say about Shadows of Ash

Things grow darker as the worlds ending continues. The Nameless are forced to work for old enemies as the list of people they can trust shrinks. In book 2 the action is harder and the stakes higher. Imagine if the old Bond villains had won. Had taken over the world. And only the Nameless (a group of international SpecOps) can attempt to stop them from total dominion.

The enemy of my enemy is my friend...

Another stellar outing from AJS... Shadows picks up immediately after the events of Whispers of Ash as Ryan and his team try to make it back home to America. But the Yakuza and OPIS have other ideas! love the characters as they struggle with the moral and ethical problems they are presented with. I'm beginning to detect a deeper meaning to this story and the underlying theme I think the author is trying to convey. This isn't just an action/post apocalyptic thriller. It asks questions.
What would you sacrifice for humanity?
Is good and evil really black and white?
If you had an opportunity to save the world from destroying itself, are you willing to kill billions?

Bring on book 3! I need to find out.
Also, I must say the narrator is fantastic! brings the characters to life

Continuing from book one, it picks straight up. There is non-stop action and surprises along the way. Think you have it figured out yet? Every time I do, I'm wrong. This is fresh when it comes to this genre. I am on my way to book 3. The narrator is excellent as well. He does American accents well with a word mispronounced here and there as to how and American might say it. It does not take you out of the story though. Quite a good book that takes life seriously and the taking of life just as serious. The characters have depth and you can feel the pain and exhaustion. I want Zanza to stop and give up sometimes because I'm tired of being chased. Yet twists and turns come from nowhere to give you a respite but also keep you guessing. What is the big play? Who is friend or foe? It's nerve racking yet that makes this book great. Read book 1 for free. Buy this one. Book 3 is next.

i loved the first book! this was agreat story and narration too!
now to listen to the 3rd book in the series.

The Sequel is Even Better

Adrian J Smith does it even better than before! Book 1 of the nameless series was super, but book 2 delivers twice the energy, new monsters, and intensified relationships. There's even a new character to love!

What a ride. I was on the edge of my seat as The Nameless trys to save us all!