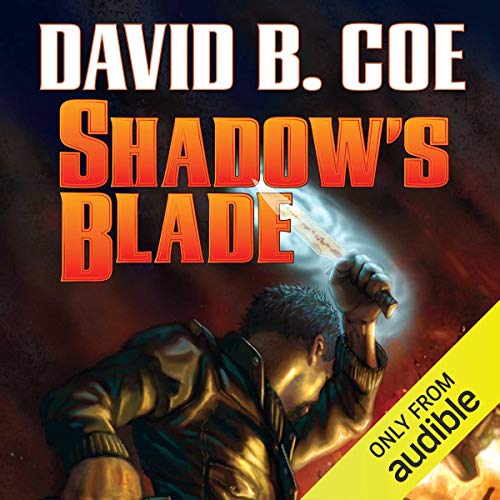 By: David B. Coe
Narrated by: Bronson Pinchot

A hard-boiled, magic-using private detective fights dark sorcerers in Phoenix, Arizona. Justis Fearsson is a weremyste and a private detective. He wields potent magic, but every month, on the full moon, he loses his mind. His battles with insanity have already cost him his job as a cop; he can't afford to let them interfere with his latest case.

Phoenix has become ground zero in a magical war, and an army of werecreatures, blood sorcerers, and necromancers has made Jay its number one target. When he is hired to track down a woman who has gone missing with her two young children, he has a hunch that the dark ones are to blame. But then he's also brought in by the police to help with a murder investigation, and all the evidence implicates this same woman. Soon he is caught up in a deadly race to find not only the young family but also an ancient weapon that could prove decisive in the looming conflict.

Can he keep himself alive long enough to reach the woman and her kids before his enemies do? And can he claim the weapon before the people he loves, and the world he knows, are lost in a storm of flame, blood, and darkest sorcery?

What listeners say about Shadow's Blade

The story is well written, the characters interesting and well developed, it moves along at a good pace. Our hero and his friends are very likable. Bronson Pinchot does a great job performing. I hope Coes writes more of this series.

Great narration and good story. This has turned into a really good series. Main character is well developed and narrated. The story lines aren't new, but they are thought out and well written.

It gets better and better

Sometimes when you a read a series there is a limited sense of storyline, like each novel is just the main character fighting the next bad guy, well this series is no different BUT the storyline does actually build so the story gets better and better.
I wasn't sure I liked Justis in Book 1, but Bronson Pinchot was reading so I gave book 2 a crack and was hooked, and then guttered when Book 3 was the end :)
Justis is a little broken but completely likeable and surrounded by a supporting cast of strong women, interesting men and fun action, I like that he is clever but that is revealed to us slowly.
The introduction of kids into a book can turn this sappy and weak, but not here, definitely added to the storyline without making me cringe.
thanx David B Coe for another great listen.

Most enjoyable. Book three is very good, the protagonist, Justis Fearsson faces his enemies using his magic and his wits. With dark magic and dark sorcery on his ands and trying to help the police with an murder investigation, he is kept busy . A very fast paced book, well written and performed excellently by BronsonPinchot. I hope book four will be published soon.

David B. Coe and Bronson Pinchot are winners!

I find these books just fun. recommend the series for something that is light but doesn't blow your mind