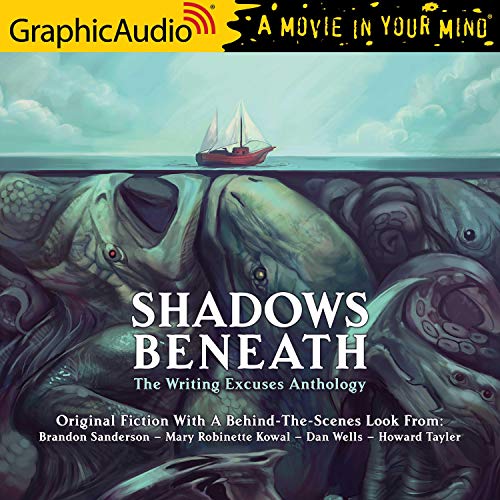 From the Hugo Award-winning hosts of the Writing Excuses writing advice show comes a collection of all-new stories of the fantastic, with beautiful illustrations and a behind-the-scenes look at each story’s creation.

Brandon Sanderson’s “Sixth of the Dusk,” set in his Cosmere universe shared by the Mistborn books and the number one New York Times best-selling Stormlight Archive, showcases a society on the brink of technological change. On the deadly island of Patji, where predators can sense the thoughts of their prey, a lone trapper discovers that the island is not the only thing out to kill him.

Mary Robinette Kowal’s “A Fire in the Heavens” is a powerful tale of a refugee seeking to the near-mythical homeland her oppressed people left centuries ago. When Katin discovers the role the “eternal moon” occupies in the Center Kingdom, and the nature of the society under its constant light, she may find enemies and friends in unexpected places.

Dan Wells’s “I.E.Demon” features an Afghanistan field test of a piece of technology that is supposed to handle improvised explosive devices. Or so the engineers have told the EOD team that will be testing it; exactly what it does and how it does it are need-to-know, and the grunts don’t need to know. Until suddenly the need arises.

Howard Tayler’s “An Honest Death” stars the security team for the CEO of a biotech firm about to release the cure for old age. When an intruder appears and then vanishes from the CEO’s office, the bodyguards must discover why he is lying to them about his reason for pressing the panic button.

For years the hosts of Writing Excuses have been offering tips on brainstorming, drafting, workshopping, and revision, and now they offer an exhaustive look at the entire process. Not only does Shadows Beneath have four beautifully illustrated fantastic works of fiction, but it also includes transcripts of brainstorming and workshopping sessions, early drafts of the stories, essays about the stories’ creation, and details of all the edits made between the first and final drafts.

Come for the stories by award-winning authors; stay for the peek behind the creative curtain.

What listeners say about Shadows Beneath

Fun Stories and a Great Look at the Process

I don't do many reviews but I really liked this product and would love more. Each story was unique and interesting but I especially liked the look at how each story evolved and became better through the help of positive, intelligent workshopping. I also liked hearing the time references-- the revelation that a good story, even a short one, could easily take a year or more to get right.

Two things I'd love to see different: first it'd be great if the Audible chapter stops actually aligned with the beginnings of brainstorming moments, first and second drafts, and followup notes. They don't and skipping ahead drops you into purely arbitrary places.

second, I'd love an option that allows me to hear each final story _after_ the process rather than before.