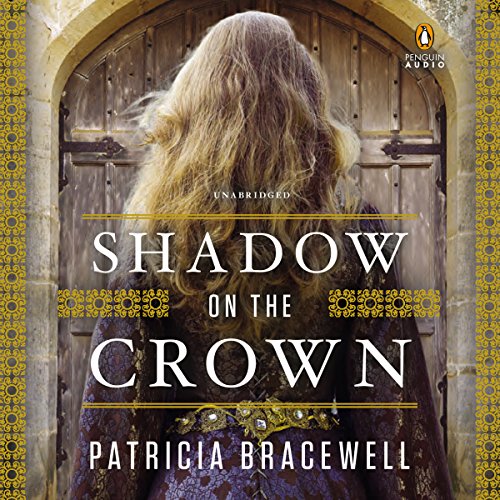 Shadow on the Crown

Shadow on the Crown

In 1002, 15-year-old Emma of Normandy crosses the Narrow Sea to wed the much older King Athelred of England, whom she meets for the first time at the church door. Thrust into an unfamiliar and treacherous court, with a husband who mistrusts her, stepsons who resent her, and a bewitching rival who covets her crown, Emma must defend herself against her enemies and secure her status as queen by bearing a son.

Determined to outmaneuver her adversaries, Emma forges alliances with influential men at court and wins the affection of the English people. But her growing love for a man who is not her husband and the imminent threat of a Viking invasion jeopardize both her crown and her life.

Based on real events recorded in the Anglo-Saxon Chronicle, Shadow on the Crown introduces listeners to a fascinating, overlooked period of history and an unforgettable heroine whose quest to find her place in the world will resonate with modern listeners.

Interesting fictionalized presentation of the politics of post-Alfred (and pre-Norman) England. This is a time period of which I have read little historical fiction, but I would like to hear more. Details of daily life (especially for nobles) seem to be portrayed well. There is enough suspense, some gore, no gratuitous sex. It gives a pretty good sense of what it must have been like to live under the shadow of fear of Viking raids. Aethelred "Unred" Is shown as waffling and increasingly mentally unstable; but the story also gives a good feeling for what it must be like to hold power in a world where power-grabbers abound, and the way to power is violence. The way to power for women, make no mistake, is in relation to a man, and there is little enough even then. Overall, although not outstanding, I found it entertaining and somewhat informative. My main complaint is that it ends abruptly, and the next story is not yet available..

Would you consider the audio edition of Shadow on the Crown to be better than the print version?

For me? Definitely. That may not be the case for all maybe.

The chase with the King of Denmark for action! Emma's challenges at court for character!

If you could take any character from Shadow on the Crown out to dinner, who would it be and why?

Bravo Katie! Great job reading this with the pronunciations and inflections! I hope you are there when the next book comes out!

This book has sex.

Well, this is a book I am still confused about. The story is good, but most of the characters have names that are very, very much alike which, made it hard to follow at certain times. Given that it is a historical novel, I wonder if perhaps it might have been a good idea to give the characters names that, at least, began with a letter other than the 'A'. Perhaps it was hard for me because I am not familiar with the history of England -and Europe, in general- so far back in time.

I found the ending to be a bit abrupt and leaving an unresolved story; perhaps it was intentional to give way to a sequel. In that case, I would like to read it.

The narrator was very good and even though the accent was quite heavy, It was nice to listen to her.

All in all, I enjoyed it; I will have to 'read' it again to see if I can actually grasp a little more of this interesting historic passage but, I will study a bit about it in order to understand it.

The idea was interesting and I like the ties to Queen Emma's true history. However, it's a bit shallow and at times I felt like I was plodding along just trying to find out what happens in the end. I'm hooked enough to complete the trilogy, but wouldn't rank it among my favorites.

Why Did I Wait So Long to Listen to This One?

I bought this one over 6 months before I listened to it and I once I started, I wish I had listened immediately. Every part of this book was excellent and from the reviews, the next book is one to read not listen to and I'm VERY SAD that they didn't continue with the same narrator. She was superb.

What disappointed you about Shadow on the Crown?

Has Shadow on the Crown turned you off from other books in this genre?

I like historical fiction with female characters. But I hate this book. Can't even listen to the rest of it.

What aspect of Katie Firth’s performance would you have changed?

What character would you cut from Shadow on the Crown?

I really don't care enough about the book to cut any of them.

What stood out most was character development, most notable Ethelred; while not being a necessarily wise king, he is at least shown as one of action, which does not necessarily hold with the historical characterization. The spectre of Edward haunting him and prompting him to act was a really interesting dynamic, and also to a degree explains why Edward (who will ultimately become Saint Edward the Confessor) was named as heir above the older Aethelings--typically Emma is blamed for that.

The change in character perspective was really nice to see, and the point-of-view of more minor characters was really interesting also. The only complaint I have is about the story or plot is the romance between Emma and Ethelstan. It's a bit contrived and predicable; I read a fair amount of historical fiction (much of it involving royalty), and it's a plot point in two out of three.

The narrator was great. A strong and steady voice, and inflection was such that no superfluous accents were necessary. I would listen to more narrated by Katie Firth.

Very compelling, well paced story about a relatively unknown heroine and the destiny of England during the Middle Ages. Narration was pitch perfect. Highly recommend (especially for historical fiction fans!).

I am always looking for good historical fiction about this time period in England so was thrilled to find a trilogy about Emma of Normandy - a fascinating person who few know about. Patricia Bracewell certainly did her research and her historical facts are fairly accurate and you can learn a lot about life in Saxon England before the Vikings really took over and before the Norman invasion. But this novel is really drawn out and tedious - it covers a 4 year span with far too much detail of emotional hand wringing, spousal abuse, constant metaphors comparing weather to physical states and endless ghost sightings by the tortured King Ethelred. And of course the obligatory forbidden sex scene between the Queen and her stepson which is a total fabrication. I certainly can't imagine listening to Book 2 of the trilogy which doesn't even get us to Emma marrying Cnut. Unfortunately there are very few books written about this fascinating time so if you have an interest it may be worth a listen but I can't recommend it without reservation - I was too relieved when it finally ended..

I love historial fiction about Britain, but this one was just okay for me. The story itself seems to drag on and on with not a lot of major events to push it forward. To make the story more interesting the author put in an over abundance of sexually explicit content, which in my opinion was very unnecessary and made me rate it lower. The narrator was good though.