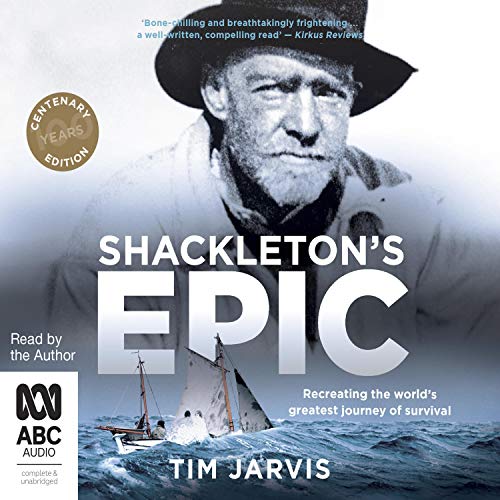 A new edition to mark the centenary Ernest Shackleton's epic 1916 journey across 1300 kms of hostile ocean in a tiny, leaking boat and unmapped ice and snow to reach a rescue station by British-Australian explorer Tim Jarvis, who recreated 'Shackleton's Epic' in 2012.

Sir Edmund Hilary called it the greatest survival story of all time. In 1916, just months into Ernest Shackleton's third expedition to the South Pole, his ship, the Endurance, became trapped in pack ice and sank. With winter setting in and supplies running out, Shackleton faced a terrible dilemma: should he and his crew try to survive on a remote Antarctic island and probably die waiting for rescue? Or should they make an almost certainly doomed journey and sail in a lifeboat across 800 miles of the world's wildest ocean and then trek over unmapped glaciers to reach help? Showing astonishing courage, Shackleton and a small band of men set off in an open boat. Incredibly, they survived.

Almost a century later, explorer and environmental scientist Tim Jarvis set out with a crew of five to replicate Shackleton's journey, using the same equipment, eating the same unpalatable food and facing the same hostile ocean conditions. Shackleton's Epic is the story of that expedition - the wretched lows and the occasional highs and the mental and physical toughness required to survive in one of the last wildernesses on earth. Moving between the past and the present, this is a must-listen audiobook for all Shackleton fans and lovers of epic adventure.

"Jarvis's tribute to Ernest Shackleton's Antarctic expedition had had a danger and heroism...worthy of the original." (Guardian)

What listeners say about Shackleton's Epic