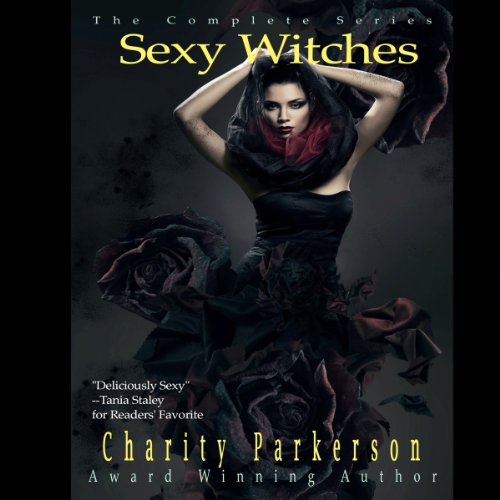 Book One: The Sexy & The Undead

A potion gone wrong, or right? Single, unemployed, and in charge of her very own pet zombie, Ella Perry is cooking up trouble, and it's raining men.

Book Three: The Pixie & The Prince

Be careful what you wish for, or better yet, what you allow your friends to wish for. As Samuel the Dark’s ward, Tam the Pixie is living in the mortal realm under the watchful eye of her guardian angel, Thomas. However, when she gives Thomas one free wish, she never expects that he’ll use it to turn her life upside down.

Guardian Angel Gideon Black has found a new career since being granted his freedom from the Heavens. Working as a professional fighter has given Gideon a place to release his powers. However, he has another outlet in mind - Skylar Jones.

Book Five: The Wizard & The Wanton

Out of the three Fates, Rowena is the wildest. No matter how hard she tries, she can’t seem to stay out of trouble. Now, she is in the biggest fix of all time. She’s lost one of Heaven’s Seers to the Devil, and she needs Randall’s help in order to find her.

What listeners say about Sexy Witches

This collection was okay.

Okay, I have bought a couple of collections like this that were awful - bad writing, bad narration - total waste of time. This wasn't one of them. It was "fine". In the right mood for some silly sexy paranormal - (more angels than witches to be honest) fun this could be just the thing. There was nothing about it that made me want to turn it off, but also nothing about it that made me want to keep going. To be honest, half way through I got a bit bored and actually did go and listen to something else that I was more in the mood for. I did eventually come back to it though and finish it off. The writing is decent, the narration decent (it isn't one of those awful stiff narrations that makes some audio's unlistenable, but also wasn't a melt your panties narration).

Overall it was just okay. Worth the time if this is your kind of thing and you are in the mood for it, but not a pass up everything else and *definitely* get this one selection.

This book is ridiculous and not in a good way.

This book has no plot, the story skips from person to person with out warning, it is not developed in any sense. The book is so bad you may get a frown line from thinking to your self how bad it really is. The narrator is holly jackson so I tried to listen as she usally does a wonderful job, but even she could not do much with this story. The sex is vulgar and every 5 minutes not tastfeul in the least and the sex scenes go on for way to long I had to fast forward.If you are looking for a good book continue to look as this is not it.

So... if I can't keep my attention on the story... especially when I have my earbobs in... Well, guess I am bored, bored, and bored!

really wasn't worth the time to read. I look forward to exciting times but just to see how outrageous and filthy you can write doesn't make it a book or author to recommend.