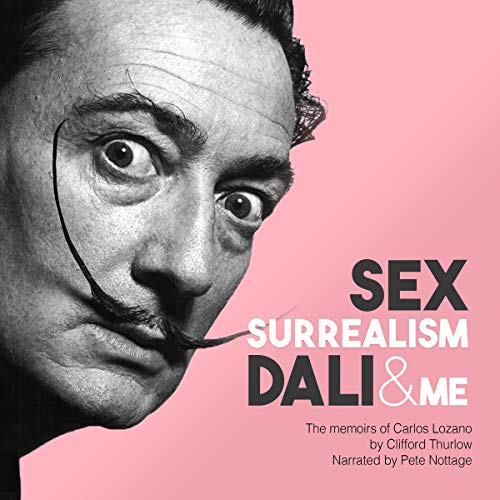 Sex, Surrealism, Dali and Me

Sex, Surrealism, Dali and Me was first published in 2000 and was a top-10 best-seller a year later.

It tells the biographies of two remarkable men. Salvador Dali, one of the 20th century's greatest painters, and his long-term muse - the Colombian dancer Carlos Lozano.

Dali was famously a voyeur, and in this extraordinary audiobook, we are witnesses to the bizarre sexual fantasies he lived out among celebrities, aristocrats, enemies, and the plain crazy.

Carlos Lozano's sexy eyewitness account of life with Dali is described in a colorful, energetic style that touches the sublime and the magnificent. The combination of his story and the breathtaking style of his collaborator, the award-winning writer Clifford Thurlow, combine to create an audiobook that is truly memorable.

"For once, names are named and the veil of hype and mystique that so often surrounded Dali is blown away for all to see. Once we started, we couldn't put it down!" (International Art & Literature Journal, April 2000)

"The Surrealist painter deliberately lived his life to complement his deceptive and illusory art. By the end, it was so close to being a confidence trick in itself that historians and biographers have had to struggle to separate fact from the sexual fantasy. Sex, Surrealism, Dali and Me is now set to bring the voice of an eye witness to the Salvador Dali myth - and to all the orgiastic gossip about the past." (Vanessa Thorpe, The Observer)

What listeners say about Sex, Surrealism, Dali and Me

A life that was Surreal

The age old question is does life imitate Art or in reverse ? When dealing with this brilliant and strange Artist one can
ask can anyone ever imitate him ?


This fascinating Audio Book gives you a brief glimpse into a true genius with all the positive and negative aspects
of having such unique gifts.

The Narrator does a good job with the material and helps give you a small idea of what went on in this unusual characters mind.


This book was given to me for free at my request and I provided this voluntary review.

Great story! great narration!
I was given this free review copy audiobook at my request and have voluntarily left this review.

Even the memoir feels surreal

I came into this book knowing almost nothing about Dali, except for knowing some of his art work. I come out not really knowing much about him, but feeling I somewhat know him. This memoir is not a collection of chronological events, telling of what Dali et al did, and when. It is a swirl of personal stories and actions in an undefined timeframe, sometimes with clear explanations of who and where, but many times it does not. You get to know what sort of person Dali is like (brilliant in many ways, frustration and brilliantly arrogant in many others, very much a voyeur and possible predator) but not so much of what he did in the wider context of the world. It’s close, it’s personal.

The way the book is written, without clear time frames or locations, often without defining the people involved properly (for example: Louis XIV is mentioned as a friend of Dali’s constantly, but never explained who he is. Certainly not the long dead King of France) gives the book a energetic, surreal feel. It all feels not quite real. How much of this is from Dali’s friend Carlos Lozano and how much is author Clifford Thurlow is not really clear. But I guess it doesn’t matter. Either way, it is wonderfully written and the book just flies by.

I don’t think I would have wanted to know Dali. But to spend a few hours in a book like this getting to know his world and his people is certainly an enjoyable use of time.

Narration by Pete Nottage is good. He doesn’t provide voices to the personalities in the book, and potentially is English accent is at odds with Dali’s supposed dislike of all things British, but he reads with an energy that suits the book well. He is well paced and clear and keeps the text moving and energetic.

This book was given to me for free at my request and I provided this review voluntarily.

Provocative in its insights and freshly illuminating by shining the bright light of day upon the intimate intricacies of the genius behind such monumental works of art as The Persistence of Memory, the Great Masturbator and The Meditative Rose, those who are curious will find themselves immersed in the entirely surreal life of one of the greatest surrealists of all time, both artistically and personally. Told through the eyes of Columbian dancer, Carlos Lozano (Dali’s: friend-influence-muse-sycophant Pick one or all) this biography examines some of Dali’s most hedonistic and profane years as Dali’s dallies daily with dancer Carlos Lozano, through whose eyes this biography is told. Perhaps there is no way for a mere mortal to understand the workings of Dali’s mind, but once you have experienced Clifford Thurlow’s insights into who, or what was Salvador Dali, you will never view his paintings in the same light again.

Being an admirer of his art, and also a Spaniard, I was very intrigued about this book. This is Dali seen by the loving eyes of Carlos Lozano, a model, and a dancer, Dali’s friend but also his protegee. Thanks to Lozano and Clifford Thurlow we get some insights about Dali’s life and eccentricities, and how everything seemed to revolve around the artist in a unique and extravagant way.

The book is beautifully written, and despite some powerful images that can’t just be unseen by my mind’s eye, I enjoyed it tremendously. I didn’t aspire to understand Dali by listening to this book, since understanding him would be impossible, like understanding and replicating his art. Someone able to create those paintings had to be a tormented and egocentric soul, which is what Carlos Lozano is showing us here.

It was a very heartfelt biography, and there were some torturous and hard moments that Thurlow expressed like he was Lozano himself, the ever waiting young man for his idol to be near.

Pette Nottage’s narration was the perfect delicious match for such a beautiful text, and not only his interpretation of Lozano was simply sublime. When impersonating Dali, Nottage was just exquisite. The only minor setback is that the few Spanish words in the book were mispronounced, which is a shame, considering that Lozano’s mother tongue was Spanish. Anyway, I guess very few people will notice this.

A very recommendable listen for anyone who appreciates Dali’s art, not to understand him, but to know him a little bit better.

I received this book for free in exchange for an honest review. This does not affect my opinion of the book or the content of my review.

A must read for anyone interested in Dali and Surrealism

An imersive insight into the Cadaqués clique, with Salvador Dali at the center. Fascinating insight into the Surrealist era, bringing art to life. I liked the descriptive passages especially, they are beautifully written to bring this Catalan corner of Spain in its heyday to life. But brace yourself for Shocking and frank revelations of Dali’s private life too. Carlos’ own story within the book is equally fascinating, it’s cleverly woven together to take the listener from Colombia to LA to Paris to Cadaqués.

Great to learn so much about Dali. Amazing story and well narrated too. Would recommend

I know this book very well in its written form and enjoyed hearing it read even more. Salvador Dalí is witty, funny, and outrageous. Pete Nottage captures the humour perfectly and brings the story to life. I am new to audible and thrilled to discover Sex, Surrealism, Dalí and Me all over again.

Sometimes a great book is turned into an awful movie. Sometimes, a great filmmaker turns a mediocre book into a wonderful film. Every story has its best medium. The combination of Nottage's well-paced, smooth, sometimes surprised and joyous style has established what I believe is the best medium for this biography.