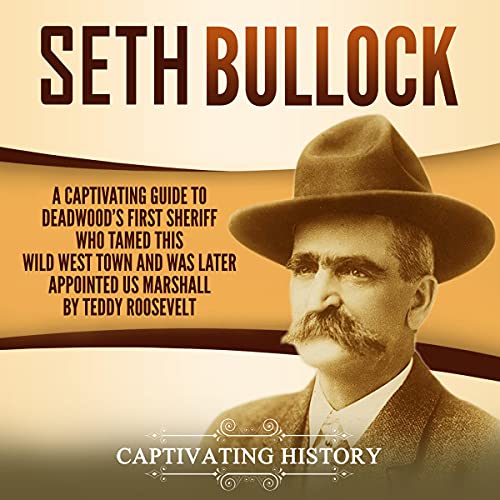 Do you want to get to know the man who tamed the wildest corner of the West? Then pay attention....

Deadwood, 1876: a notorious little mining town in modern-day South Dakota that was a hive of criminal activity. Thieves, drunkards, prostitutes, and murderers ran rampant among its booming streets. There were over 300 murders in this town during the first year of its existence.

When Wild Bill Hickok was brutally shot and killed at point-blank range in the back of the head, it was obvious that someone had to rise up and save the town of Deadwood from itself. Someone with nerves of steel and a keen sense of justice. Someone like Seth Bullock.

This Canadian-born legend has been immortalized in television and film as the steely-eyed sheriff who brought Deadwood to its knees without killing a single person in an era of bloody frontier justice, but there is far more to Bullock than just his short career in Deadwood. He was a businessman, sheriff, US marshal, soldier, husband, friend, and survivor. Seth Bullock is truly the stuff of legend, but his story is entirely true.

In this audiobook, you’ll learn more about Bullock’s escapades, including:

Scroll up and click the “buy” button to learn more about Seth Bullock!

What listeners say about Seth Bullock

Wow, this title really WAS captivating. It was a fascinating look at the life of Seth Bullock. Though I love history and the Wild West, I had never heard of him before. Great storytelling, interesting facts about the time, and fascinating connections to other well-known figures of the West. The length was perfect, too. Very enjoyable.

this narrative filled many gaps in Seth Bulocks life for me. An interesting story for sure.

The fun and interesting fact about reading about people like this are that they are bigger than life. You would have to read something from Zane Grey or Louis L'Amour where "History" was created to pack so much life into one lifetime. This is a good example of a life well-lived.
The kind of person I would love to have a sit-down long conversation with.

When I saw the name Seth Bullock, I couldn't recall being familiar with him or his story. I've heard of the Deadwood show, but haven't watched it... now I think I might have to! My favorite things that I learned about him were:
1) he wasn't known for being cruel and
2) this is what makes him my new hero.... he started the National Park movement with Yellowstone!

interesting read being a fan of the Deadwood series. These men lead a rough life. This book helps one understand just how rough it was for men like Seth Bullock