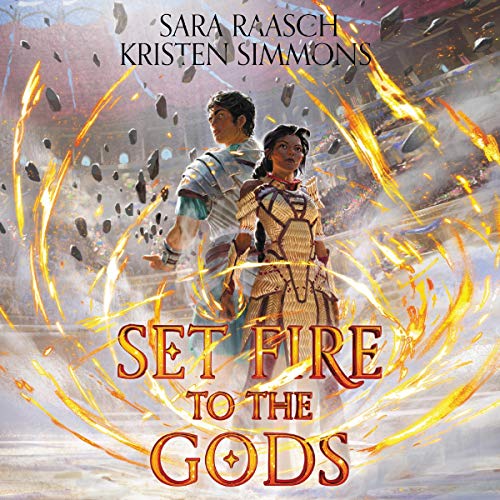 Set Fire to the Gods

Avatar: The Last Airbender meets Gladiator in the first book in this epic fantasy duology in which two warriors must decide where their loyalties lie as an ancient war between immortals threatens humanity - from Sara Raasch, the New York Times best-selling author of the Snow Like Ashes series, and Kristen Simmons, acclaimed author of Pacifica and The Deceivers. Perfect for fans of An Ember in the Ashes, And I Darken, and The Winner's Curse.

Ash is descended from a long line of gladiators, and she knows the brutal nature of war firsthand. But after her mother dies in an arena, she vows to avenge her by overthrowing her fire god, whose temper has stripped her country of its resources.

Madoc grew up fighting on the streets to pay his family's taxes. But he hides a dangerous secret: he doesn't have the earth god's powers like his opponents. His elemental gift is something else - something that hasn’t been seen in centuries.

When an attempted revenge plot goes dangerously wrong, Ash inadvertently throws the fire and earth gods into a conflict that can only be settled by deadly, lavish gladiator games, throwing Madoc in Ash's path. She realizes that his powers are the weapon her rebellion needs - but Madoc won't jeopardize his family, regardless of how intrigued he is by the beautiful warrior.

But when the gods force Madoc's hand, he and Ash uncover an ancient war that will threaten more than one immortal - it will unravel the world.

What listeners say about Set Fire to the Gods