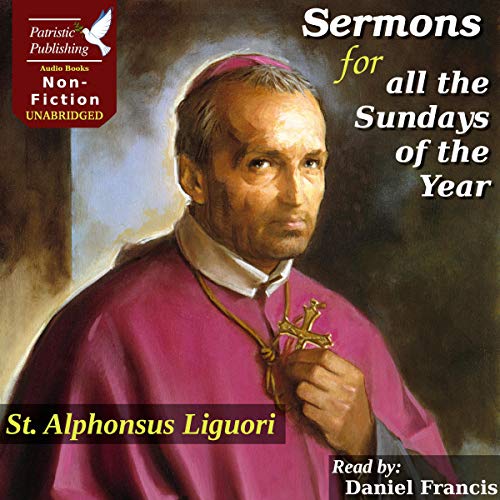 Sermons for All the Sundays of the Year

St. Alphonsus Liguori (1696 - 1787) was an Italian bishop famous for his moral teaching. He was born in Naples to a noble family who directed his life into law. After earning his degree, he led a very successful law practice until at the age of 27 he gave it up to become a priest. He was ordained at the age of 30, and then became a minister to the poor, founding a number of "evening chapels". These chapels were managed by youth, and became centers of prayer and piety, preaching, community, social activities, and education. He would live to see 72 such centers founded with 10,000 members.

In 1729, he started to travel as a missionary to the poor. Later, in 1732, he would found his own congregation. In 1762, he was appointed bishop against his will. Throughout his life, he wrote many sermons and books on the faith. He also reformed the seminary in his diocese and suspended priests who celebrated the Mass in less than 15 minutes. He also sold the wealth of his office to give the poor. He died in 1787 and was canonized a saint in 1839 and declared a doctor of the church. This collection of sermons brings to together St. Liguori's best material in a condensed form, organized for each Sunday of the year.

While some of the references might be arcane by today's standards, the sentiments expressed are timeless and the narration is impeccable. The moral teachings derived from these sermons are invaluable. Easy to understand and one my favorite books.