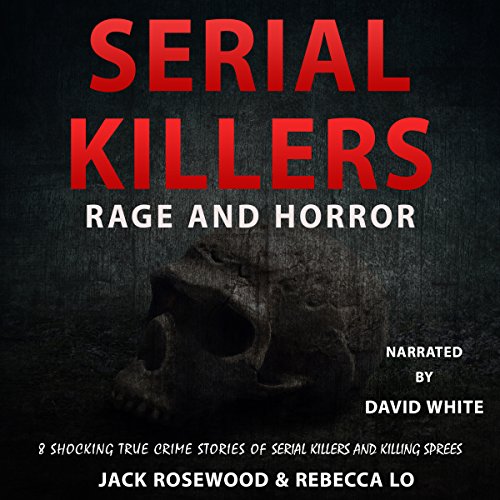 From rampage killers to hunters that seek out human prey in the shadows of the night, this serial killer anthology is a collection of horror stories. Collectively these men were responsible for hundreds of deaths, and they all belong in the realm of the worst serial killers to date. Delve into eight different cases and explore the heinous deeds committed, the background of each killer, and the apparent motives for their crimes.

There are those who went on deadly rampages, such as Cho Seung-Hui and George Hennard; men who decided to inflict as much terror in one day as they possibly could. Famous serial killers are included, such as the Hillside Stranglers, Kenneth Bianchi and Angelo Buono, and the Beast of the Ukraine, Anatoly Onoprienko. There are also lesser known murderers such as Fritz Haarmann and Ronald Dominique, who preyed on young men for their own deviant pleasures.

Each of these true murder stories will leave you with a sense of horror and perhaps a little fear. David Parker Ray's surviving victims still live in fear today, and this notorious true crime story is one of the most sadistic and disturbing. With tales of torture, mind control and violence, very few survived their time in Ray's toy box.

The true crime stories in this book have been selected because of the horrendous nature of their actions and the sheer volume of victims they slaughtered. Innocent people, going about their daily business or asleep in their beds, all make up these serial killers true crime stories.

What listeners say about Serial Killers Rage and Horror

I found some new and interesting stories in this audio. Some I knew and some I did not. I love true crime and the way the mind works. This was a truly and enjoyable listen.

Mr. White did a wonderful job on the narration. He did a few character voices which were really good but most of the book is about facts and there is no need for them. He has a very pleasant voice that really adds to the detail of this audio. He gave the facts as they are but with interest like he really enjoyed learning the facts as much as I did. There are no repeats of words, nor any background noise, there are no volume changes. The music fits the story when it is used it isn’t over powering and blends very well. I thought his performance was great and he added a lot to the story with his tones and emotions. I look forward to listening to more of his work.

The research the author does is wonderful really getting all the facts and laying them out for the reader. I really got lost in the facts and the stories. I look forward to reading more from this author.

One of the best true crime books I've listened to

Would you listen to Serial Killers Rage and Horror again? Why?

Yes, I'm sure I will. This was one of the best I've listened to or read. Some of the cases were familiar to me and there were some I don't remember hearing about. The author goes into good detail about the killers and what led up to their crimes. He even includes some information about the victims as well. This book was very well written and contains more information than I expected.

Have you listened to any of David L. White’s other performances before? How does this one compare?

I'm not sure if I have listened to David L. White before or not but I did like his narration. He was clear and not overly dramatic.

Being a book about killers and their victims, all of the stories were sad.

This was well worth the listen and I would recommend it to anyone who has any interest in this topic. I was voluntarily provided this free review copy audiobook by the author, narrator, or publisher. However, I would not have been the least bit disappointed had I paid for this book.

Jack Rosewood is a total expert at telling these true crime stories (and in this case Rebecca Lo, as well!). With just the right amount of detail, enough to satisfy but not too much to bore, this series is well crafted. David L. White does a good job with narration. If you enjoy short form true crime, then this is a collection for you!

Would you consider the audio edition of Serial Killers Rage and Horror to be better than the print version?

Yes because I prefer listening to a story

What other book might you compare Serial Killers Rage and Horror to and why?

No favorite scene, they were all horrible stories well written once again by Jack Rosewood

I was voluntarily provided this free review copy audio book by the author, narrator, or publisher.

*I received a copy of this audiobook for an honest review*

Fascinating! I'm always interested in learning about true crime stories from before I was old enough to understand. Which, I know, may be weird. But, it interests me, and I've always been into the psychology of such things. This book presented several stories of murders, and told them in short order while still giving all of the information necessary. This matters to me as I've read books completely full of fluff and that seem to be trying to drum up sympathy for a killer. This did not do that, and instead actually made sure that the victims were remembered in the telling, listing every soul taken.

The narrator was perfect for this genre, as well. Good pace and excellent tone, he kept me interested throughout.

I thought this was very well done and would suggest it to anyone with an interest in True Crime.

The narrator did a wonderful job.

If you are into true crime, this book is for you. Rosewood and Lo present serial killer stories and supplement information. The narrator, David L. White, stoically presents the information in a manner that is not exaggerated or overly dramatic. The only negative aspect, as with most true crime books, is the authors' need to present a human element by calling the killers monsters and talking about how they deserve to be imprisoned. I just want to hear about the stories. Overall, a great listen.

I am a fan of true crime books. I listen to lots of them. This book impressed me. not only does it go into a lot more detail, the writer was smart enough to talk about the survivors as well as the vic and what they have went through. Most crime stories just barely touch on that if any of them do. The writer was also very detailed and It very interesting at the same time.
It's pretty scary that people out there are like this, people are always looking for reason for why things like this happen, I personally often think there is no reason they're just not "right" some how,
As the writer states lots of people have bad things happen but not everyone decides to turn into a serial killer etc. Because of sexual abuse physical abuse or whatever in their childhood. Great point
I was voluntarily provided this free review copy audiobook by the author, narrator, or publisher.

I love true crime stories (why, I have no clue lol, I can't watch an animal even look sad but I can listen to serial killer stories all day long - huge Stephen King fan), and this one was a gem among gems. Really riveting stories and horrific crimes, just what we true-crimers love. Some you may know, some you may not. All good ones, though. I loved the stories, writing and narration, definitely a good job all around. Definitely recommend it!
I was given this free review copy audiobook at my request and have voluntarily left this review.

interesting book and cases. I was familiar with some of the killers profiled in the book but I still managed to learn something new.