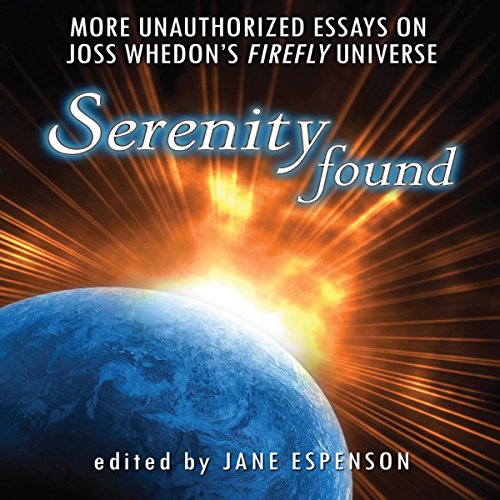 A lot has happened since Finding Serenity. We learned River's secret; Mal took on the Alliance. Our favorite crew became Big Damn Heroes. And the Browncoats proved that hard work, passion, and a little fan coordination can do the impossible. Serenity Found takes the contents of Finding Serenity even further, exploring not just the show but the events of the film as well, to create an anthology that's even more thought-provoking, fascinating, and far-thinking than its predecessor.

"Lots of fun, lots of new insights, even some new facts a diehard Browncoat like me hadn’t heard yet." (SerenityStuff.com)

What listeners say about Serenity Found

Loved the first but several times this one the writers specifically misinterpreted parts of the show/movie that didn't meet their interpretations.

NOT stories set IN the Firefly universe.

I was hoping for stories set IN the Firefly universe. This book is stories about how the (absolutely FANTASTIC) TV show being made influenced people's REAL lives. While interesting, it wasn't what I was expecting and was disappointed. (I was also disappointed by the fact that Nathan Fillion didn't read his own piece, but glad he is so busy we get to see him other places.)

I'll be returning this book also. Expected a Firefly story, not review of the series

Ok, but not the best honestly.

Look, I love Firefly. Kaylee is my cosplay of choice. But I was really bored for a lot of this book. Some of these essays are just not good. Especially the MMO one. And the narration style wasn't great either. It seemed like there was two voices that kept cutting in and out? And he spoke in a very monotone and boring voice. Maybe I would have enjoyed this more if I had read they physical copy. But there are some good moments. I really enjoyed Nathan Fillion's essay and the analysis of "Out of Gas." Look, there's nothing terribly wrong with it, and at worst it made me relieve Firefly and made me want to watch it again. Would I read it again? No. But it's not a waste of time for any Browncoat.

I liked this audiobook, and I preferred it to the previous Finding Serenity.

However, it was a bit of a drag, and it felt like at least half of the essays had nothing to do with Firefly or Serenity. Like, I purchased this audiobook to listen to a book about Serenity, not Stargate or Buffy or Battlestar Galactica or Criminal Minds, even if I like half of those programmes. It was a bit of a letdown.