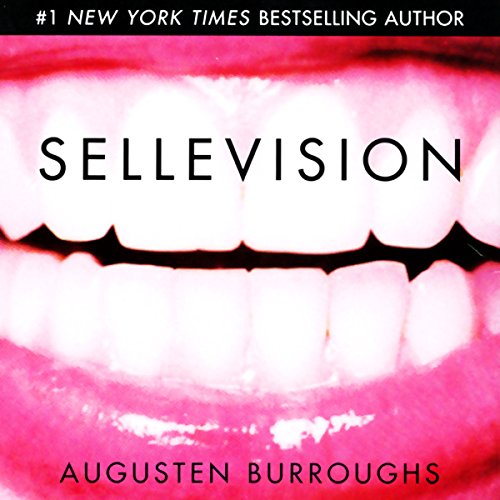 Darkly funny and gleefully mean-spirited, Sellevision explores greed, obsession, and third-tier celebrity in the world of a fictional home-shopping network.

Welcome to the troubled world of Sellevision, America's premier retail broadcasting network. When Max Andrews, the much-loved, handsome (but lonely) and gay host of Slumber Party Sundown accidentally exposes himself in front of 60 million kids and their parents during a "Toys for Tots" segment, Sellevision faces its first big scandal.

As Max fails to find a new job in television, another host, the popular and perky Peggy Jean Smythe, is receiving sinister e-mails from a stalker about her appearance. Popping pills and drinking heavily, she fails to notice that her husband is spending a lot of time with the young babysitter who lives next door. Then there's Leigh, whose affair with Sellevision boss Howard Toast is going nowhere until she exposes him on air, and Bebe, Sellevision's star host, who thinks she can find Mr. Right via the Internet - if she can just stop her shopping addiction from taking over.

My first audiobook - No regrets.

This is the first audiobook I've completed (second attempted) and I really enjoyed it. The narration was great - I was happy with the changes between characters and I found the narrators voice to be pleasant. The story itself was funny, engaging and sometimes dark. I felt that even though there was an ensemble cast everyone was given a good amount of time and I wasn't left wondering where anyone's story left off. If you're looking for something that will hold your interest I definitely recommend this.

A Peek behind the Scenes..

This is one funny piece of fiction...a peek behind the scenes of a pert of middle class America. If you have every been flipping channels at 3am you will laught out lound at this story!

WELCOME to Sellevision! From the prissy high and mighty star who loves her pills a little too much to the accidental Host's embarrassing exposure. exposure which down the road translates a a very lucrative career...you just never want it to end.

I would love to see this go to the screen!Robert Downy Jr. a must in the movie!

A departure from Burrough's memoirs, but a delightful intertwining of plots, personalities and twists. At times a bit complicated, but a true soap opera novel. Seems to have left open room for a sequel...

AB does it again. Hilarious, crude, and well versed. can't wait flee the next one

This is one of my favorite books Carla so I was really excited to hear it on audible. I was so so disappointed to hear the narrator a. It just does not go at all with the protagonist in the book. I mean I'm a feminist, but there are times when a male voice is necessary, and this is 1 of those times. Only listen to the 1st few paragraphs and then I had to turn it off. Will be asking for a refund.

The story gets 4 stars because I've already read the book several times and I love the story. Just wish there was a better narrator. And it's not that this narrator is bad, she's just not appropriate at all for this particular book.

loved every minute of it. Actually laughed out loud. it's the only book I've listened to more than once.

This novel (and the audiobook) is such a fun and funny read. Characters you can love and hate with a great and fast moving plot.

I can guess exactly whom these characters were modeled after, hehe. This was such a fun, clever, and engaging story that I didn't want it to end! The narration, like the story, was superb!

Augusten Burroughs is my favorite author of all time! This was the most entertaining book I've read!

Fun listen!! Characters are interesting!! Reader Robin Miles does a great job with the characters (i always love listening to her!)

This was a very enjoyable listen. There were some very funny parts in it and there were some interesting revelations at the end. The reader is very good as well. However, I don't think this book is suitable for anyone under the age of 18, as it contains strong adult content and language.