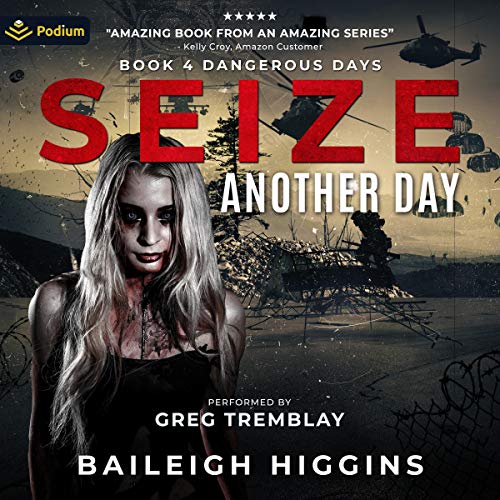 Fate hangs in the balance....

Max fights a losing battle to keep the camp intact and his family safe. Faced with the specter of starvation and disease, he's forced to make a decision. One that could be their salvation, or cost them everything they have including their survival.

Enraged by the loss of Mpho, Michael sets off on a quest for revenge. One that will take him far from his friends, but even farther from himself. Can he regain his senses before it's too late, or will the darkness in his soul finally reign victorious?

All it takes is one mistake.... As night steals across the African veldt, danger stalks those who struggle to survive within its chill embrace. With the coming of a new dawn, humanity's last hope rests in the hands of ordinary men and women called to do extraordinary things.

What listeners say about Seize Another Day

The series is a good read, and I wish I'd been able to physically read it rather than listen to it. The characters are interesting and the story is engaging. It was great to read a book that happens in my home country, and I wish there had been more of the country involved.

The narrator is really excellent when he's using his American accent, but his South African accents are absolutely terrible. I admit that he did get a bit better towards the end, but generally he was so way off the mark with accents. Afrikaans farmers sounded like Russian caricatures, and English speaking Saffers sounded like inebriated Australians. As for Nadia... I honestly have no idea where that accent came from.

I put up with the shocking accents because I wanted to hear the story, but the whole experience would have been so much better if they'd just used South African narrator/s.

I enjoyed this installment of the storyline. And the last little bit on Cat was really good as well. The narrator did an great job as well.

I enjoyed 4th book in this zombie series

Baileigh Higgins Post apocalyptic zombie series set in South Africa Keeps up a nice pace of suspense, zombie action, Survival and struggle. This is the 4th book in the series, and I have binge listened with enjoyment. The action and adventure Has been consistently entertaining. The characters, good and evil , are equally intriguing. I am a bit disappointed When the author kills off a main characterBut not enough to stop listening .
I am not sure if this is the last book or not but if another comes to audible, I will listen.
The narrotor Greg Tremblay Is amazing, I can't say enough about how well I like his narration. I don't know if it is an authentic South African accent, but I don't care because each and every character had their own distinct voice, And for me thats excellent narration.

Really liked this series overall but it was a bit depressing. Feel it didn't need to be so, with the killing off of main characters. But overall i did enjoy this series and the narrator is fantastic.