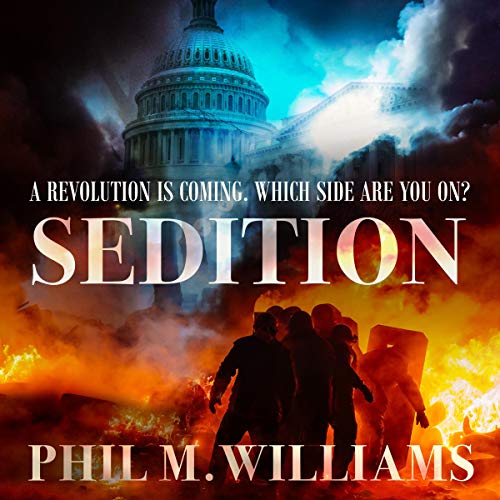 A trucker, a blogger, and a congressman determine the fate of the most powerful empire the world has ever known.

Americans are angry and divided along party lines. They’re tired of the endless wars, high gas prices, and high unemployment. They’re tired of the graft in DC and on Wall Street. They’re tired of being spied on and herded like cattle into the prison industrial complex. Like in years before, they’re certain that, this time, their guy will change everything. The Republican and Democratic saviors make their promises, and the true believers swoon, but domestic terrorists aren’t buying what these politicians are selling.

Truck driver George Chapman is in the right place at the right time to foil an assassination attempt on one of the most influential men in politics. Some might say the reluctant hero was in the wrong place at the wrong time. Some might say it was a false flag. Nonetheless, his 15 minutes of fame grows because of his extraordinary gift. Will he use his gift and newfound fame to unite the country or to tear it apart?

A revolution is coming. Which side are you on?

What listeners say about Sedition

Phil Williams is an insightful, talented author. This was the second of his novels Ihave listened to from Audible. Fortunately, there a half-dozen more to enjoy and think about. I am a retired journalist who worked in and around Washington, DC for almost 40 years. The author's assessments are sadly accurate. I'm old now and don't waste my time listening to crap. This is a very good book, start to finish if you are a person brave enough to think for yourself. Sheep are sheared and eaten, remember that.

You can't go wrong here... unless you're a statist

There isn't a lot of action, but the author does a good job with character development, the story is interesting and pulls at those emotional strings that keeps you listening. At 18 hours, this book is an extremely good value for the credit (or cash). My favorite part is the political perspective shared throughout the book; one which is this author's specialty, but which is very hard to find in novels these days. Phil does an excellent job explaining the voluntaryist positions without sounding judgemental or preachy. Unless you're a statist, I think you'll really enjoy this book.

Where to start with this immense book? It’s ambitious in its scope and disturbing in its plausibility. Essentially it’s about the US financial system and its vulnerability. It’s obvious the author has put in his research with this one and it’s a subject close to his heart. There are a lot of very interesting characters showing various viewpoints as the tensions grow and things become dangerous for everyone, not just those directly involved. If half of what Phil M Williams writes is accurate the world really could be in trouble. The main thing that I took from this book was that it made me think a lot about how the world is structured. Any writing that can do that is great writing in my opinion. Phil M Williams always writers with authenticity and that’s what keeps me coming back for each of his books. Give this a go and be prepared for it to worry you long after you finish it.
Sarah Grace Wright and Tristan Wright, the narrators, do a superb job reading this complex book. I’ve listened to them read many of Phil M Williams books and they are all very very good but I think this is the best they’ve done yet. There’s a lot of different characters for them to bring to life and they do so giving each their own identity. They give the book the weight and tension it needs and elevate an already wonderful story even higher, recommended.