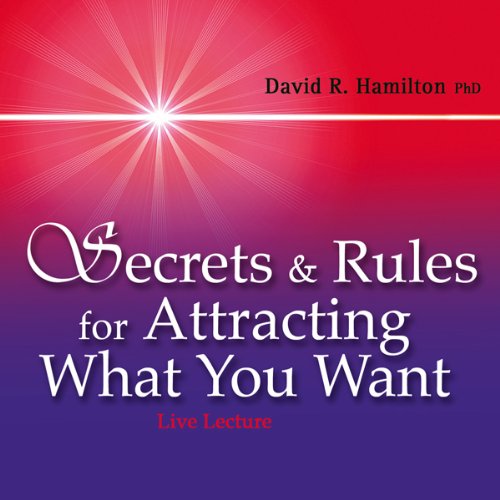 Secrets and Rules for Attracting What You Want

David Hamilton gained a first class honours degree in chemistry, with a specialisation in biological and medicinal chemistry, and a Ph.D. in organic chemistry before going on to be a scientist in the pharmaceutical industry in 1995. After four years he left and has since worked as a motivational speaker, co-founded an international relief charity, co-organised a 9-day, 24-event festival of peace called Spirit Aid, and worked as a college lecturer in both chemistry and ecology.

He has been featured on TV, BBC radio, and has been the subject of national newspaper articles. He spends most of his time writing, giving talks and leading workshops on the topics of his writing. He lives in Windsor.

We attract the life we think about. Discover how the law of Attraction works and how to speed up the process of creating the reality you dream of. In this live lecture download you'll learn and practice Dr. Hamilton's nine principles for inspired attraction as well as meditations and exercises to strengthen your ability to attract the life you want.

Dr David R Hamilton gained a PhD in organic chemistry in 1995 before going on to be a scientist in the pharmaceutical industry. Fascinated by the results of drugs trials in which placebo recipients responded as well as participants who trialed the real drug, he began to research the mind/body connection. This research eventually led him to leave his job and become a motivational speaker. He appears regularly in the media.

A must to listen to

Very powerful message delivered in the most simple way. The last part was really about acceptance of things that we couldn't change and how to get our lives around it. An audio book worth listening to again and again. Thanks Dr Hamilton!!!

Gave a better understanding of the law. Not so drawn out you loose focus. I really enjoyed this.

How to change your life!

I love the way David tells his stories with humour and good grace. His messages hit the sweet spot, and I will certainly endeavour to put his rules for attracting what I want into practice. Many thanks David for expressing so clearly how to attract what I want, and for the scientific studies that support your work. An excellent Audible listen.