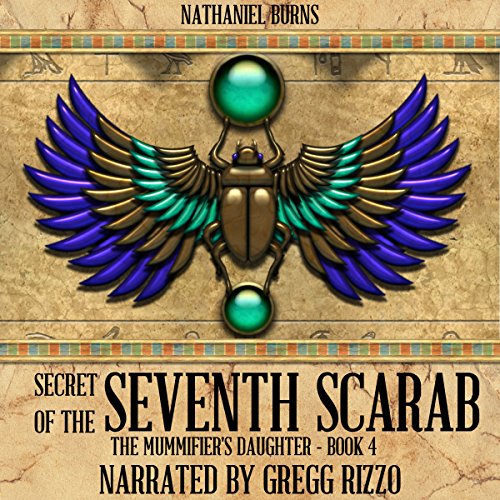 Secret of the 7th Scarab

While the pharaoh tries to conceal the disappearance of Queen Nefertari's sacred heart scarab, along with Shabaka's abduction, fears of a curse befall those travelling eastwards through the desert.

Neti and Moses, during their investigation and search for Shabaka, uncover a sinister underground network in Thebes that have since the pharaoh's move to Pi-Ramesses resulted in numerous underhanded dealings. Here Neti has to come to terms with the life she, by chance, managed to escape.

Will they find Shabaka before he disappears in the underground network? Or will Ma-Nefer finally have his revenge against the Nubian prefect and the Mummifier's daughter?

The Secret of the Seventh Scarab returns us to a land steeped in mystery and magic. It paints a detailed picture of Ancient Egypt in all its glory. Faithfully recreating one of the most remarkable eras in Egypt's history, author Nathaniel Burns weaves a shudderingly ominous tale of ancient Egypt's mysteries revealed through a cast of characters the modern reader will recognize even though millennia have passed.

So light up the incense, sit close to the light and draw back the curtains on the shadowed past with this gripping tale of love and intrigue among the living and the dead in one of history's most intriguing civilizations.

What listeners say about Secret of the 7th Scarab

I love Egypt, the mystery, adventures, and the stories that reveal new insights make good reading. Given audio the narration added to this story for my voluntary review and my honest opinion

Would you try another book from Nathaniel Burns and/or Gregg Rizzo?

I really like this series by Nathaniel Burns. I'm not the greatest fan of Greg Rizzo's narration, but it is okay.

I feel like it was an odd place to end the book. I was completely expecting another chapter and then all of a sudden I'm hearing the ending credits...I almost feel it would have made more sense to cut the story shorter in a suspenseful wait.

The narration is okay, a little slower than I'd like, but not awful. I've heard worse.

Would you try another book written by Nathaniel Burns or narrated by Gregg Rizzo?

Another Nathaniel Burns but not this narrator

Has Secret of the 7th Scarab put you off other books in this genre?

Would you be willing to try another one of Gregg Rizzo’s performances?

If you could play editor, what scene or scenes would you have cut from Secret of the 7th Scarab?

Dont know, I couldn't finish listening to it, I was too irritated!