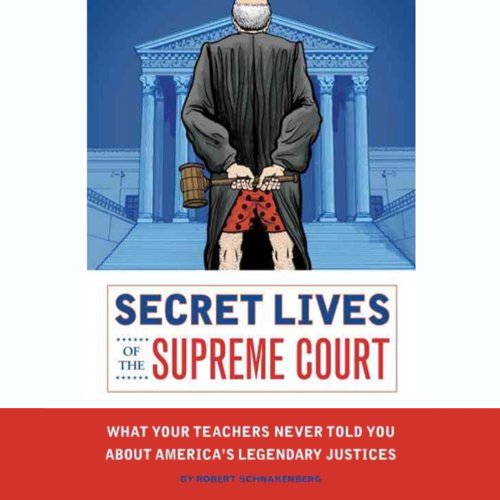 Secret Lives of the Supreme Court

Like the other volumes in the "Secret Lives" series from Quirk Books, Robert Schnakenberg's colorful exposé of America's Supreme Court justices is often snarky and irreverent. The fun is in the details, like in the sound-bite gems that Benjamin Cardozo "likely died a virgin" and that every year Harry Blackmun celebrated the anniversary of his appendectomy.

Gregory St. John performs this audiobook with a wry amusement befitting the eccentric material. The personality of each justice might be exaggerated for entertainment value, but the writer has done his research, thus the biographical treatments in Secret Lives are equal parts history and sadistic tabloid.

And much, much more! With chapters on everyone from John Jay to Samuel Alito, Secret Lives of the Supreme Court tackles all the tough questions that other history books are afraid to ask: How many of these judges took bribes? How many were gay? And how could so many sink into dementia while serving on the highest court in the land? American history was never this much fun in school!

What listeners say about Secret Lives of the Supreme Court

Don't Waste Your Money or Time.

What would have made Secret Lives of the Supreme Court better?

If it were not so poorly written and thinly researched. This book was an utter waste of time and money.

What could Robert Schnakenberg have done to make this a more enjoyable book for you?

if this work was intended to be frothy and vacuous, it succeed. Begins with giving the astrological signs of the justices and degenerates from there into standard, threadbare politically correct pablum. Remarkable only insofar as the entire work deals with important cases and history changing decisions without stumbling over a single insight or legal concept. Not worth the time...