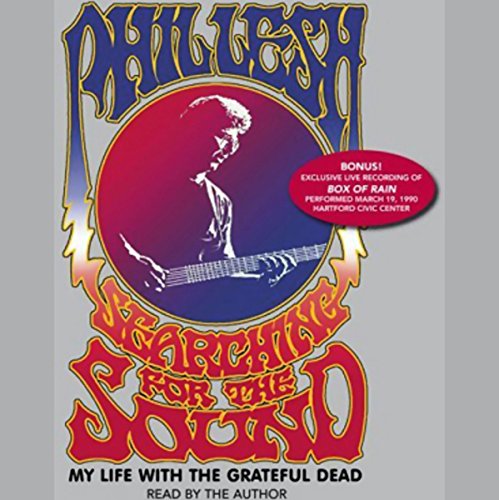 Searching for the Sound

Phil Lesh first met Jerry Garcia in 1959 in the clubs of Palo Alto, California. At Garcia's suggestion, Lesh learned to play the electric bass and joined him in a new group that blended R&B, country, and rock 'n' roll with an experimental fervor never before heard.

In time for the Grateful Dead's 40th anniversary, Phil Lesh offers the first behind-the-scenes history of the Dead. Lesh chronicles how the Dead's signature sound emerged, flowed, and swelled to reach millions of devoted fans, from their first gigs at Frenchy's Bikini-A-Go-Go for an audience of three, to the legendary Acid Tests, to packed stadiums around the world.

In San Francisco during the Summer of Love, at Woodstock, Altamont, and the Great Pyramids of Giza, the Grateful Dead have been at the center of some of rock's defining moments. Phil Lesh recounts what it's been like to live at the heart of this whirlwind, impressing Miles Davis and Dizzy Gillespie, sharing the stage with Bob Dylan, Janis Joplin, and the Rolling Stones. Lesh describes what it was like to storm heaven night after night, and the price he and others have paid. Bad management, drug addictions, depression, and insecurities persistently plagued the band members and would culminate with the most tragic blow of all, the death of Jerry Garcia.

Searching for the Sound is a ruthlessly honest look inside one of the greatest American bands.

"It's hard to say which of these miracles is more profound: the fact that after three decades with the Grateful Dead, Lesh has any memories of the experience whatsoever, or that he's been able to consolidate them into a single volume of less than 20,000 pages." (The New York Times Book Review)

What listeners say about Searching for the Sound

Searching for the Sound

I am a Deadhead and musician and I learned a lot from this book with regards to the creation of the music itself,and Phil.A little extra here and there about Kesey and the Pranksters,and the happy and bad times with the Dead. Brutally honest..
Great read too,I bought the book as well..

I can't be qualified as true Dead Head, being born a little late and not having had the opportunity to follow the band to hundreds of shows. But I've loved their music and have been fascinated with them since I first heard "American Beauty" as a mid-70s teen. I have been fortunate to see the Dead a few times and Phil & Friends more recently. Phil's a great musician and a talented writer to boot. Hearing him narrate his own well-written story, I feel I got an insider's view to the whole Grateful Dead experience and the collective soul of the this phenomenal band. This audiobook is not to be missed if you're any kind of fan at all.

It is interesting to hear this in his voice. He, really personalizes the experience.

This book is off the charts, music charts that is. If you lived through the 60's and remember it you know who the Dead are. I'll be darned if they didn't put their pants on one leg at a time like the rest of us.

I have always been a Dead fan, but never a "Deadhead," so a lot of the information here was new to me. I was fascinated by Lesh's stories of the early days up through the "end" and beyond...

I would have liked to hear the full version of the book. I didn't realize it was an abridgement.

Whether you're a Deadhead or not this is a great listen.

Phil Lesh's book brings you inside the creation and demise of one of Rock's most influential working bands.

Beautifully narrated by the author with articulate precision and passion this book makes tangible the optimism of 1968's "Summer of Love" through the dark turmoil of Altamont and beyond. Phil and the Dead were part of it all.

Beyond the insights into the Dead's creative process, this book reveals the real life of a hard working rock band, from the Filmore to the big stadium shows, with all the baggage included.

If you did not have the chance to live this and see the Dead in their prime, then this is a good taste of that Long Strange Trip.

What was one of the most memorable moments of Searching for the Sound?

I really like how Lesh looked back over the events of the dead and spoke more about what was going on culturally at the time, rather than at how the band was feeling at every moment.

Have you listened to any of Phil Lesh’s other performances before? How does this one compare?

Yep.... But I think this was his first book.

This book is not just about the music and the drugs. It's a real eye opener on one man's philosophy. Lesh does a great job covering a ton of material, and being more than open about his own short comings or disclosing an event as a "how he remembered it" depiction. If you like the Dead or just a fan of music or the 60s, 70s, 80s and their culture, this book would be a good read for you.

Musicians and fans of guitar, 60s will love it

Great story, written by and told by Phil Lesh. From the author's childhood - growing up playing trumpet and violin in bands, through his failed entry into the Army, flunking out of college and being down on his luck, this is chalked full of great stories. The time Phil first hears Jerry Garcia play, stories about Neal Cassidy, Woodstock, Altamont, jamming at the Egyptian Pyramids. It's all great, and it's all firsthand stuff (from the guy that was there). There are heart wrenching stories about the demise of the Dead - alcohol, drugs, women. The best stories, though, are about the music. The way the Dead invented the "jam band" sound. How they would play off each other through tension/resolution and call and response. It's a must read for musicians, deadheads, and fans of the 60s.

Searching for the Sound With Phil Lesh

Phil Lesh's narration makes you feel like you're walking with a childhood friend--whom you've recently reconnected with after many years apart--as he updates the story of his life's distant journey.

Startling successes neutralized by demonic descents of debauchery are shared with alluring alacrity.

From Palo Alto to Altamont, syringes to sphinx, the "long strange trip," is recounted in earnest
.
Anyone interested in the Grateful Dead, the rise and fall of the hippie culture and an intimate overview of the spoils of corporate rock and roll will enjoy this book.

It's the fastest five hours of non-musical audio I've ever listened to. I highly recommend Lesh's work. His passion is pulsating; his integrity inspiring.