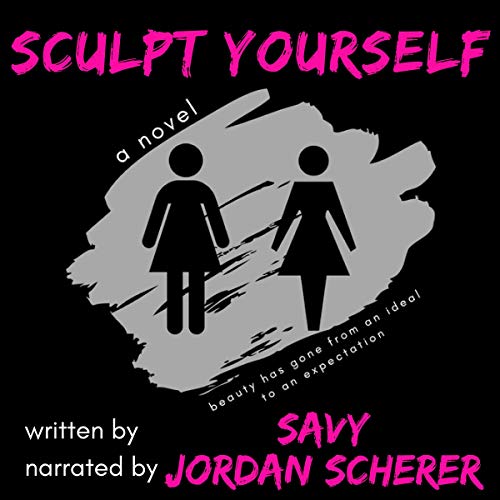 Lipomorph is a drug that lets you sculpt yourself. It's how so many female celebrities in the mid-2010s remained so thin while having such large butts. It loosens up the fat in your body, allowing you to choose your proportions. And it's just been legalized for sale in Chicago.

Amber is a 24-year-old tech support worker by day, gay feminist blogger (and bad-sitcom aficionado) by night. She's been vocal about her disapproval of Lipomorph from the beginning, seeing it as another tool to reinforce patriarchal beauty standards; but as Lipomorph becomes more common, Amber's dissenting voice starts to matter less and less.

Judie is Amber's younger sister and seemingly her complete opposite: She loves pop music, pretty latte art, and dating men. After struggling with hating her body for most of her life, Judie has become borderline reliant on Lipomorph for self-confidence, much to Amber's dismay.

Kelly is an artist currently working for the marketing firm on the floor above Amber's office. She's whip-smart, proudly bisexual, and strikingly beautiful...and she's the woman Amber's fallen in love with.

Told from these three women's points of view, Sculpt Yourself tackles body image, LGBT+ topics, and what it means to be a feminist in the 21st century.

What listeners say about Sculpt Yourself

Sculpt Yourself is a thought-provoking story told from the perspectives of three women and their experiences with a new drug, Lipamorph, which allows users to quickly and easily reshape their bodies. Each of the women has a unique perspective on Lipamorph and the personal, medical, and cultural issues surrounding its use. Although this is categorized as a sci-fi novel because of the fictional and futuristic-seeming Lipamorph, this really does feel more like a contemporary novel and the sci-fi elements are minimal. The focus is primarily on the characters and their relationships. It's a quick read but packs a heavy punch with its subject matter.

The author does a really great job of exploring the numerous issues the story raises in a nuanced and thoughtful way. What may seem black and white at first often isn't, and as the story goes along, we get to see some of the more difficult issues tackled about how society often tells women what they should be and then tries to shame them for not meeting expectations or for taking back their own power in those situations. I really appreciated all the discussion points raised. If you enjoy seeing feminist and LGBTQ issues explored in stories, Sculpt Yourself is a great book to pick up.

Cute! Fun escape from the stuff going on around

I heard about this book from one of her YouTube channels. I thought she was clever as hell (Amber voice). I freaking loved her online intro. I picked this book up on audible with the full expectation Savy would not disappoint. She did not. The characters were relatable and charming. I loved her character development and foreshadowing. This girl is talented and exactly what you need in your life.

This title had a wonderful narrator and an interesting sci fi idea. I had some problems with the pacing of the novel but overall I liked it.