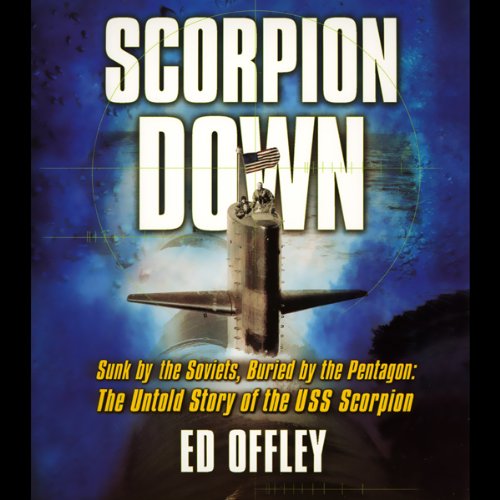 One Navy admiral called it "one of the greatest unsolved sea mysteries of our era". To this day, the U.S. Navy officially describes it an inexplicable accident. For decades, the real story of the disaster has eluded journalists, historians, and the family members of the lost crew. But a small handful of Navy and government officials knew the truth from the very beginning: the sinking of the nuclear submarine U.S.S. Scorpion and its crew of 99 men, on May 22, 1968, was an act of war.

In this major work of historical reporting, Ed Offley reveals that the sinking of the Scorpion has never been a mystery, but rather a secret buried by the U.S. government in a frantic attempt to keep the Cold War from turning into a hot war. The Soviets had torpedoed the Scorpion in reprisal for the destruction of the Soviet missile sub K-129, which the Americans had sunk in the Pacific just 10 weeks earlier. But why does the U.S. Navy continue to hide the real story of what happened on that fateful day in 1968?

In Scorpion Down, military reporter Ed Offley tells the true story for the first time and dramatically recounts a little-known episode that nearly brought about World War III. And he conclusively demonstrates that the Navy's official account of the Scorpion incident, from the frantic open-ocean hunt for the wreckage to a court of inquiry's final conclusions, is nothing more than a carefully constructed series of lies.

What listeners say about Scorpion Down

A thoroughly riveting account of the loss of the United States submarine "Scorpion".

Well worth your time and the money to purchase.

The narration is superbly done as well.

I recommend this book without reservation.

A great story with some logical conclusions. Being in the Navy during that time period and involved in crypto/intelligence most if not all the information is well presented.
My only negative observation was the very poor edit job. As you listen most of the selection breaks were done in the middle of a word which sometimes made it difficult to understand.

This book purports to be the true story of the Scorpion but fails to give any true answers. Offley continues unsubstantiated conspiracy theories about the Scorpion, he provides multiple conflicting Scorpion conspiracy theories combined to create one grand conspiracy theory of the sinking(thankfully no aliens are involved). He makes innuendos based on suspicions and memories decades after the fact and reports them as unquestioned facts. He uses official Navy logs that don't support any of his theories as proof that his theories are based in fact. Offley argues that the ship was in great condition and that a mechanical malfunction onboard was improbable. This ignores overwhelming evidence that the Scorpion was in fact overdue for an overhaul and extensive repairs as well as the damning evidence of the sailors derisive nickname of the Scorpion the USS Scrapiron. He does not provide answers on the loss of the Scorpion but self aggrandizement and a bashing of the government in general and the Navy in particular without any documents to support his theories. Please listen if you want a good laugh on conspiracy theories but if you want a factual and unbiased account of the Scorpion go somewhere else. I regret buying this tripe.

Apparently a topic of decades long interest for the author, he presents a detailed history of submarine tactics during the cold war in an interesting (if occasionally repetitive) chronological manner. His continuous re-examination of the available facts surrounding the loss of the Scorpion, spanning many years, gradually fills in the gaps in the official record to present a credible scenario of the last hours of the sub's existence. The last twist in the story was so unexpected (at least to me) and yet made so much sense in the context of the cold war and the condition of the Soviet navy, that it makes the author's case for me.

As time passes, and more naval records become declassified, it is interesting to imagine what further twists this story will take when the next layer of this onion is pealed away.

Where is the evidence from Russia?

I found this book very interesting and it makes many good points about the loss of the Scorpion.
I was disappointed,however,that very little evidence from Russia was given by the author to make his case. Certainly,many Russians must have taken part in or known of the sinking but only one is cited and his statement needs support.
I feel the author has only proved that it is
probable and not certain that the Russians are responsible for the loss of the Scorpion.

Whether or not the conclusions drawn by the author are true The book gives a very detailed look at nuclear submarine warfare intelligence gathering and overall mission explanations against the Russians.

A story of mute "silent" service

Tantalizing at first, and increasingly revealing at every next phase. A listener unfamiliar with submarines are given the insights needed to understand what occured. Excellent narrative.

Good historical documentary, but feels too much as a conspiracy theory. Would recommend to any navy history buff.

As I continue my journey into submarine history this was an interesting accounting of the Scorpion and of submarine history. It's nice to hear some of details confirmed one reads in other books and interesting to hear theories unique to the author.
The only weird thing was the voice of the narrator. You get use to it eventually... but that smoky, gravel- like voice makes you think of some guy dressed in a raincoat, hat, and sunglasses is secretly whispering to you, than an author reading the book.

Should be in Journalism schools everywhere

This is an astonishingly well researched book. This book gives me enormous faith in the research abilities of the author. This is an endlessly complex story of lie after obfuscation of facts wrapped in subterfuge but it is an unusual book, told unusually. The author takes the reader down every zig and zag of the research, rather than to lead them around like a horse to water. A little unusual in its 4th-wall-shattering perspective, journalist talking to reader directly as he was convinced of one version of the story after another, and sometimes invalidating his previously held thoughts. This is just the kind of story where that unusual technique works. In the end, submarine stuff is about as interesting as it gets so it held me fast. Excellent book, exhaustively researched, and very much a new important text on the subject. As for the narrator, about as good as they get - this narrator does an amazing job with technical military stuff. I really enjoyed how he played this book. I loved this one.

It was well done, however the constant mispronunciation of Submariner is irritating

ED Offley offers a detailed conspiracy theory that the USS Scorpion (SSN - 589) was sunk by a torpedo fired by a Soviet Submarine during a secret mission in May 1968.

The author provides some convincing evidence that the submarine was sent on an intelligence gathering mission after a successful patrol in the Mediterranean when the US Navy discovered a group of Soviet Surface ships and a submarine operating near the Canary Islands when the Scorpion was on its way home.

The theory is that the Soviet submarine reacted aggressively to the presence of the Scorpion and in retaliation for the Loss of the K129 in March 1968 (which they might have believed was lost due to a collision with the USS Swordfish) in the Pacific and proceeded to sink the submarine.

It is suggested that Soviets might of known that the Scorpion was sent to spy on their operation because of they had compromised the US Navy’s secret communication network. It’s argued that the North Korean’s captured the USS Pueblo in January 1968 under orders from the Russian’s to obtain it’s secret communication gear to make best use of the data and cryptographic keys flowing in from the Walker spy ring (which started operating in 1967) allowing them to ambush the submarine.

Offley claims that the US Navy knew almost immediately about the loss of the Scorpion and the fact that it was sunk by the Soviet Union due to the then Top Secret SOSUS listening posts in the Atlantic and launched a limited search operation before the Navy publically admitted it was overdue to return to its home port.

The account of the reasons for the loss of Scorpion is not very convincing, the evidence is circumstantial and lacks any kind of primary evidence. I find it difficult to believe that the Soviet navy ordered the sinking of the submarine or that a rogue commander of the Soviet sub acted without authorisation and care of the consequences and fired the torpedo. It would have been an open secret in the Soviet Navy which would have almost certainly have leaked out after the fall of the Soviet Union.