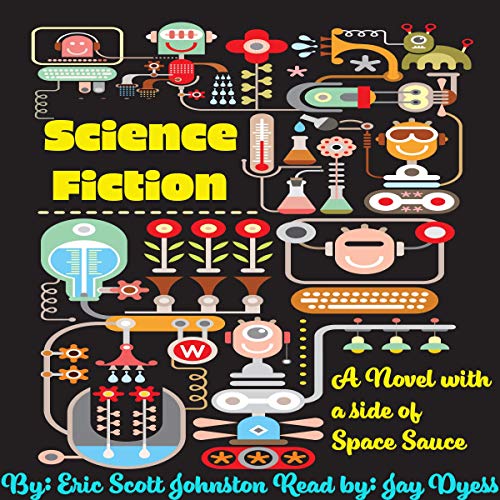 In an age where technology makes life as absurd as it does convenient, Science Fiction does for sci-fi what Pulp Fiction did for crime noir.

Somewhere in the galaxy a cooking competition goes terribly wrong-a new contestant must be found....

Joe Gillette has two issues he's working through: he's terrible with technology, and he's developed a fear of naked women.

Just in time, he is befriended by Old Cool, an alien who has been disguised as a British rock star for decades. Old Cool offers to help Joe with his problems - if Joe accompanies him back to Vermicula Prime. Without much thought, Joe agrees, and is promptly whisked into space.

Within hours of boarding the Indicus, Joe is already in trouble: his brand new, alien-developed "smart brain" device prompts him to drain the entirety of Earth's wealth so he can have some spending money in space, which he accidentally uses on a hooker. He must find a way to return the money.

Meanwhile, a soldier from a race of sentient algorithms is also aboard the Indicus. Joe's odd relationship with technology has corrupted her programming, and the only way to fix it and get on with her mission to destroy Earth is to build a human body and seduce Joe to then corrupt him in return. However, she may have miscalculated when she programmed herself with the personalities "all" of Joe's ex-girlfriends, but being human brings more trouble, and pleasure, than she anticipates.

And then there's Urti Inci, the proprietress of the Indicus, who suborns Joe to enter an intergalactic culinary competition in exchange for passage, and Antho Philo, the most important man in the galaxy, whose job to fertilize the female population on Plabobian-vaoi gets pawned off on Joe. And all on a starship upon which travelers are highly discouraged from peering out the windows. (Something about quantum physics)

Standing in their way are a galaxy full of beings ready to complicate their lives beyond anything imaginable, where the galaxy's most mismatched band of misfits must work together to conquer the ridiculousness their very coming together has caused.

What listeners say about Science Fiction