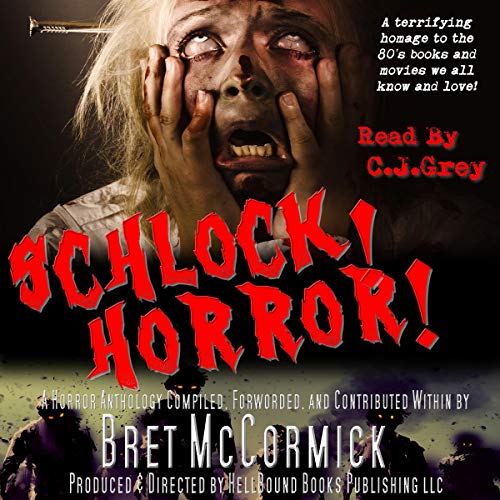 An anthology of horror inspired by 1980's schlock!

An anthology of short stories based upon/inspired by, and in loving homage to all of those great gore-fest movies and books of the 1980s (not necessarily based in that era, although some do ride that wave of nostalgia), the golden age when horror well and truly came kicking, screaming, and spraying blood, gore, and body parts out from the shadows.

It was the decade that brought us everything in the cinema and on VHS from the Italian "nasties" to Elm Street, The Lost Boys, Hellraiser, The Thing, Day of the Dead, Reanimator, Return of the Living Dead, My Bloody Valentine, Henry: Portrait of a Serial Killer, Cannibal Holocaust, and superlative directors such as David Cronenburg, John Waters, Roger Corman, and - of course - Clive Barker.

All of this was naturally reflected in the books we devoured - Guy N. Smith, Clive Barker's Books of Blood, James Herbert, Jack Ketchum, Gary Brandner, and Richard Laymon, to name but a mere handful.

This exemplary '80s themed/inspired tales of terror has been adjudicated and compiled by one Mr. Bret McCormick, himself a writer, producer, and director of many a schlock classic, including Bio-Tech Warrior, Time Tracers, The Abomination, Ozone: The Attack of the Redneck Mutants, and the inimitable Repligator.

So, you get the picture - within this audiobook, we have the darkest splatter and the most horrific gruesomeness and stomach-churning detail, all wrapped up in gripping stories played out by the strongest of characters - all of which will keep even the hardiest of souls wide awake and trembling in the wee hours.

What listeners say about Schlock! Horror!