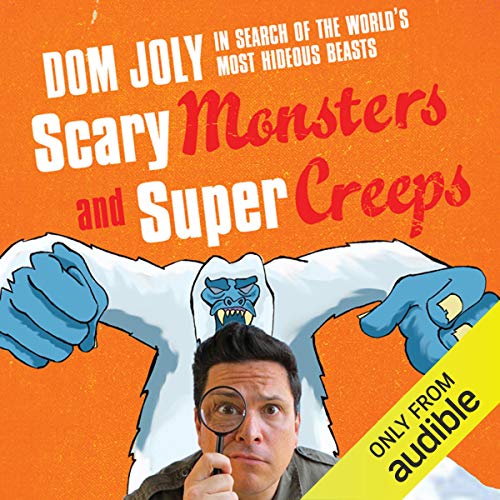 Dom Joly sets off round the world again, but this time he's not looking to holiday in a danger zone - he's monster hunting. Ever since he was given a copy of Arthur C. Clarke's Mysterious World for his ninth birthday Dom has been obsessed with the world of cryptozoology (monster hunting), and in Scary Monsters and Super Creeps he heads to six completely different destinations to investigate local monster sightings.

He explores the Redwood Curtain in northern California in search of Sasquatch; in Canada he visits Lake Okanagan hoping to catch a glimpse of a thirty-foot snake-like creature called Ogopogo; and near Lake Tele in Congo he risks his life tracking the vegetarian sauropod Mokele-mbembe. Naturally he heads to Loch Ness - but for this hunt he has his family in tow; he treks across the Khumbu Valley in Nepal looking for Yeti; and in the hills above Hiroshima in Japan he enlists the help of a local man to find the Hibagon, a terribly smelly 'caveman ape'.

In typically hilarious and irreverent fashion, Dom explores the cultures that gave rise to these monster myths and ends up in some pretty hairy situations with people even stranger than the monsters they are hunting.

What listeners say about Scary Monsters and Supercreeps

Such a fun trip around the world!

Dom Joly knows how to tell a story. I found myself laughing out loud several times during the book. I love a good travelogue and this was one of the funnest. Whether he is fighting with chiefs in the Congo, or dealing with farting horses by Everest, it's never a dull moment.

What did you love best about Scary Monsters and Supercreeps?

Dom Jolly tells a funny story but with context and details that draw you in. I don't agree with him politically or in matters of religion but he doesn't bring those viewpoints in often enough to make the book difficult to listen to. He does a great job reading the book, making you feel as though he is telling you a story instead of reading it. This is the second book I read by him (dark tourist being the first - another great read) and I hope he puts out more.

It's a pretty well known fact that Dom Joly is a travel addict. It seems he will do anything to attempt sate his travel addiction, in this case 'monster hunting' for fictional creatures. Maybe his next book will be comfy beds in luxury hotels research! But despite the obvious excuse for endless travel, this is a very enjoyable read. It's split into sections with each section dedicated to a specific monster allegedly located in a specific country.

As usual, the writing was very enjoyable and amusing. His humor shines through, and his excellent narrating make this a fun read/listen.

Would you try another book written by Dom Joly or narrated by Dom Joly?

No. This was the second book I'd purchase from Jolly. Benefit of the doubt and all that....

Not really about monsters at all

Right from the outset Dom Joly says that this book is not really about monsters... and he's right. He talks about hotel rooms and coffee and elbow-room on airplanes but he doesn't get into the mythology or history of these legends. Considering how fascinated he apparently is by monsters etc none of that enthusiasm really comes across. The performance is good though - he's a generally engaging reader of his own work. It's a light travel book about him rather than a book about monsters and the history and culture surrounding them.

Could have been so much more...

Would you try another book written by Dom Joly or narrated by Dom Joly?

Yes, I have and I will but I'm hoping it doesn't leave me as ambivalent as I was after finishing SMaS because I won't chance a third book if it does.

Dom can be a great story teller (the first afternoon in the hotel in Scotland being a good example), painting a funny and relatable situation; however, he can equally drift off and seems to loose both focus and motivation to tell an interesting story. In these moments, he feels like he is going through the motions and is tired of trying to make the story interesting. He comments about not wanting to engage with certain people he comes into contact with during the book and I, as a reader, was given the distinct impression that at moments he felt the same way about his willingness to engage with the process of writing and therefore, the audience.

The narration was fine.

Do you think Scary Monsters and Supercreeps needs a follow-up book? Why or why not?

No - if anything, the book would (could?) have benefitted from Dom investigating the more niche, and comical, Japanese monsters he mentioned (I am sure other cultures have them, albeit to a lesser degree) but another book on the well known ones would be repetitive.

Dom's charm stems from his observational approach to travel and relaying (embellishing?) of events and situations. The Japanese segment is a particular success because of this ability, as are parts of the Congo. He looses both momentum and focus when situations become more mundane and seems to struggle to make them of interest to the audience. To my mind, this is the true weakness of the book.

A great book that is a superb listen

Yep. Dom Joly. A travel writer who goes to odd places for odder reasons. His previous travel book, The Dark Tourist, is one of my favourite listens and I have to confess I bought it knowing nothing about it other that some people gave it a good review so I hope that others will discover him through these words. Dom is a man who likes to do his own thing and likes to travel alone. This allows a very clear view of his travel and you hear about the places and people he meets rather than the antics of people he has travelled with. He is always entertaining, informative and often very surprising in his honesty about how he feels and what he discovers. I am sure some will only be aware of Dom Joly through his TV work but he is a very accomplished journalist. Many may have wondered what on earth that bloke Michael Palin from Monty Python was doing as a travel journalist. Not now. Dom Joly has the talent to match the great Mr Palin because of his desire to put himself through discomfort and sometimes danger in order to make a trip he decides will be interesting. Fortunately he takes us along too. Funny, informative and surprisingly heartwarming I recommend this book (and The Dark Tourist) to anyone with even a slight interest in the world around them. I look forward to his next travels.

Couldn't get through the first half hour

Absolutely dreadful. Thought it sounded quite fun but the tone of voice of the book (made worse by the narration itself) was so pompous and awful I couldn't stand it.

I love travel books & after reading ‘The Dark Tourist’ I gave this a go....I loved it, funny witty writing from Dom & he narrates his travels well. Can’t wait for his next adventure.

I really enjoyed Dom's other books, and while I did enjoyed his writing and his narration, I felt he didn't spend long enough actually looking for the monsters (Although he did find plenty of Super Creeps).

He was probably never going to find the monsters he was looking for, but in my view he was far too rushed, with his schedule, when he got to the places the monsters were meant to be. If he was going to go looking for monsters then he should have realised that giving himself a couple of days in the place wasn't going to give him any results.

In the end I couldn't work out whether I had missed the point of the book. Was it the act of travelling to the places, or was it the meeting of the 'Super Creeps' that motivated him? It certainly didn't seem like the search for the monsters that I thought it might be from the title of the book.

Overall a funny, informative travelogue, about various countries that happen to have some mythical monsters in them.

I liked Dom Joly as a person and a comedian and couldn't wait to hear about his adventures but as soon as a Mac user tars every PC user with the title of 'supercreep' that's when I stop paying attention. Lost all respect for him in that moment. He could have made his point in a way that doesn't make it sound like anyone who uses non-Mac products is a bad person but he chose to be an idiot instead.

An alternative to the usual travel journals

I was a fan of the previous book by Dom Joly 'The Dark Tourist' so I had high expectations of this one too. He didn't disappoint. His tales of travelling mishaps and misadventures are very funny, particularly when he was in the Congo. Well worth a listen.