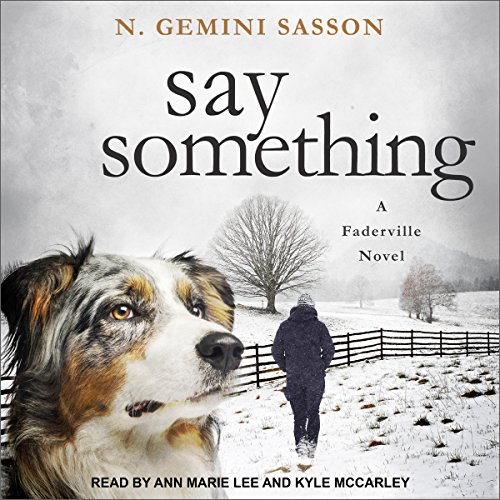 Love - especially a dog's love - can change a person.

Beam Larson is a runaway. Buzz Donovan is a drifter. They have nothing in common. But a dog's loyalty will forever bond them. Say Something is a story about learning to forgive when you can't forget - and finding love in unexpected places.

Not yet 16, Bellamy Larson - or Beam, as she'd rather be called - remembers everything. Truthfully, there's a lot she'd just rather forget. Beam never knew her father and doesn't ever want to. Her little brother died while saving her. And her mother self-medicates, leaving Beam to fend for herself. She doesn't need friends. She just needs to get away.

Buzz Donovan is on a journey across America. Luckily for him, he has a friend - a dog named Hush. It's because of Hush, though, that Buzz is homeless. But that's his choice, because if it weren't for Hush, he'd be dead. When Beam almost hits Buzz with her truck, her world is turned upside down. She doesn't trust dogs, and for good reason - she's been mauled by one.

What listeners say about Say Something

This was by far the best dog story I have listen to. Wish they were all this good. If you love dogs like I do you will really enjoy it.

I absolutely loved his book. I had just enough people dog and directions for me loved it

A must read for dog lovers!! Can hardly wait to read the next one in the series!!!

The readers were so easy to listen to that I will watch for others they narrate. The story was full of surprises and detail. I enjoyed it so much I just bought the other 2 in this series.

I loved the characters and the storyline. Great lessons about learning to overcome hardship and how to trust and love again. I highly recommend this book. If your a dog lover, you’ll fall in love with Hush.