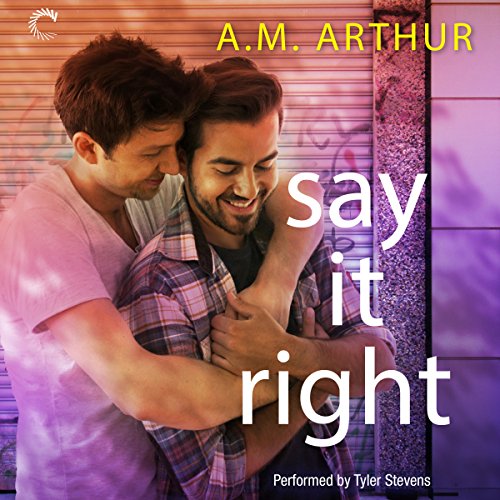 By: A. M. Arthur
Narrated by: Tyler Stevens
Free with 30-day trial

After his parents kicked him out for being gay, Marc Villegas lived on the streets before getting a second chance. Now, he's giving back by working at a shelter for LGBT teenagers - because helping fight their demons keeps his own at bay. Including his infatuation with the former best friend he's sure is straight.

Anthony Romano hasn't seen Marc since Marc left home eight years ago. In his confidant's absence, Anthony turned to heroin. Now at rock bottom, he has an offer from Marc to help him get clean. Detox is hard, and ugly, but not as hard as admitting the truth: He's in love with Marc. Always has been.

Book two of the All Saints series.

What listeners say about Say It Right

The first time that I saw the Tittle of this Series there's one thing that comes to my Mind,Nelly Furtado and the movie Wild Child (Emma Roberts).... Anyone else get that?﻿😁
guess I was right haha for Anthony, Say It Right was his song for Marco
I my self love the song itself ugh...high school days.
And also have a lot of memories with this song as well, I bet Anthony have a good choice in music though😁
I love the story of Anthony and Marco as much as I love Tate and Jonas story, I've listened to the both tittles over and over again,Dunno when will I able to listen to As I Am(Book 3) since Im still stuck for the 2 Tittles.
so addictive.
credits to the Author and Narrator.
-KC😇

Love story with a message

I loved this story, as a social worker i could relate. Story has twist and pain.

Ex best friends meet back up once Anthony comes to ask help of Marc to find her brother who since they last seen each other have gone done a bad path. Now that their back each others life they have to talk about what happened between them. Then leads the path toward getting Anthony clean and working on finding something to do. Plus there own personally relationship I didn't like how Marc made a deal with Anthony to keep him clean. However I did get the reason behind it. It just seemed Marc was using Anthony's feelings toward him as a goal for him to stay clean instead of it being about him doing it for himself. But it worked in the beginning plus it help him when he gets a job that deal with his hands. Other than that I think this book is cute about second chance and trying to get over a addiction.