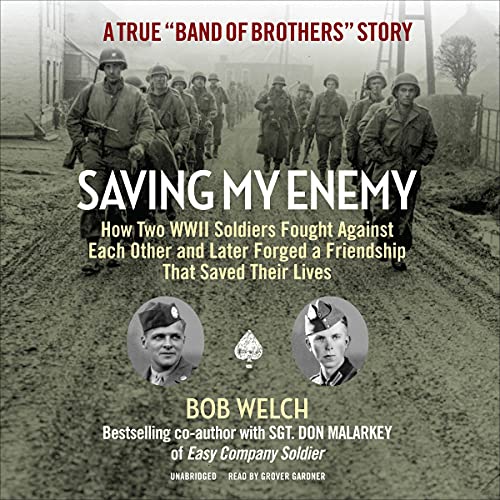 Saving My Enemy is a Band of Brothers sequel like no other.

Guilt nearly killed one of the celebrated Band of Brothers members, Sgt. Don Malarkey. He was a hero for his service in World War II, especially in the Battle of the Bulge, yet he came to the brink of suicide, haunted by the memories of the German soldiers he killed.

Across the ocean, Fritz Engelbert was shackled in shame for having been a pawn of Hitler - he, too, had fought in the Battle of the Bulge - but for the Germans. He could not find peace.

Saving My Enemy is the touching true story of two soldiers on opposite sides of WWII whose unlikely friendship, forged in their 80s, dissolves six decades of guilt and shame that had pushed both men to despair.

“I contend that every vet crying over his beer in some American Legion hall about something that happened 70 years ago is doing so not because of lost buddies, but because of lost honor, of shame. Long after World War II was over, Don helped restore that honor in Fritz. And Fritz did the same for Don. I was gripped by this story.” (Jeff Struecker, a former US Army Ranger who heard this story directly from the men’s families)

Malarkey and Engelbert had completely different backgrounds, but their stories collided amid the largest and bloodiest single battle fought by the USA in WWII - the Battle of the Bulge. Beneath blankets of snow, the earth was hardened like iron. With temperatures dipping below zero degrees Fahrenheit, the conditions were as brutal as any in the history of warfare. This was Germany’s last hope to stop the Allies, and they were desperate for victory.

Fritz, 19, a private in the Panzer-Lerh-Division, had the chief duty of being a krad messenger (on a military motorcycle). Don, 23, is a sergeant in E Company, 506th Regiment, and is living in a foxhole in the woods overlooking villages below where Fritz and other German soldiers are awaiting the fight. Both men took quiet moments of introspection. Fritz remembered a dead American soldier he saw alongside the road and he “thought of his parents who would miss him dearly” and felt a certain “brotherhood with the enemy”. Two weeks later, as Easy Company pushed Germany back, Don had a similar experience - he had just shot and killed a German soldier and was shocked to find he was only 16. “I looked at his face, eyes fixed forever. A face that I wouldn’t forget. Not the next day. Not the next month. Not ever.”

Welch gives intimate glimpses into these men’s souls as they fought each other during the war, lived in despair and guilt in the decades that followed, and finally found forgiveness and peace through each other. Don and Fritz’s story is one of hope and inspiration that will not be forgotten.

What listeners say about Saving My Enemy

We, the Malarkey family and the Engelbert family hope you enjoy our new book! We are excited to share our story of our father’s forgiveness to each other. Life is short don’t carry around negative feelings. This is what the world needs now! Peace, Love and Forgiveness! We look forward to hearing from you! ❤️

I have the honor to personally know Marianne and Dan McNally so this book really touched me. Their Dad’s story was known to me through Band of Brothers, but this book tells the deeply personal story of how Don Malarky suffered after the War and the amazing story of how he found forgiveness, for himself. Meeting his German enemy, Fritz Engelbert decades after the war ended and extending the gift of friendship to this unlikely fellow veteran brought me to tears. This story is so moving and important for us all to hear and absorb. I highly recommend this story!

I loved it. It exceeded my expectations.

I listened to the audiobook and loved every minute. Bob Welch writes in an easy and compelling
style and Grover Gardner is the best reader in the audiobook industry. I think the story telling and the reading were done almost perfectly. The story is captivating and I found myself tearing up on a few occasions as the meeting between Don and Fritz was described. I also enjoyed learning about Don’s life after his terrific biography was written, and about his personality as described by his family. I’m thankful to Don and Fritz’s children who made this book possible. It has given me a sense of closure now that there are sadly only a couple of Easy Company veterans remaining.