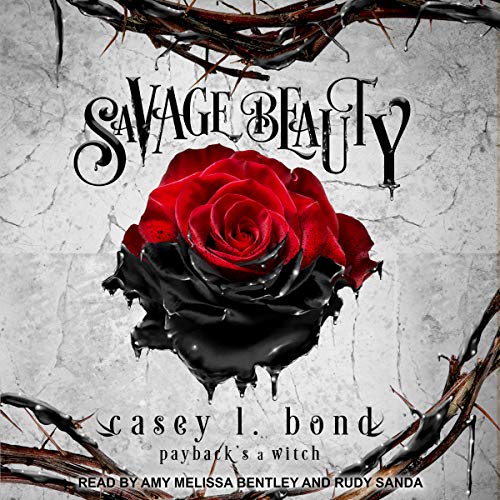 Once upon a time, a beautiful queen was cursed by a dark faery. That curse, inherited by twin princesses, Aura and Luna, binds their lives in the strangest of ways. At an early age, the girls were more than sisters. They were the strongest of allies until a combination of jealousy, anger, and dark magic tore their relationship to shreds.

Aura took everything from Luna: her home, her family, and her love by murdering the prince who'd chosen her instead of Aura.

Luna wants revenge, but she's running out of time. She must sever the magical bond tying her life to Aura's before their 18th birthday or be bound to her forever. In desperation, she seeks help from a dark fae prince, but the price is steep - a piece of her soul.

Fate is a real witch. Luna was willing to give up anything to stop her sister, until Prince Phillip of Grithim, the brother of the only man she's ever loved, falls into her life. Neither of them can fight their attraction, despite their guilt.

With Aura hell-bent on destroying everything she holds dear, Luna must decide whether she wants revenge or Phillip. She can't have both, and in the end, this may be a battle both sisters lose.

What listeners say about Savage Beauty

I did like this story but it felt very predictable, aside from that it was an enjoyable read.

I couldn’t finish it

I thought this had a lot of potential to be a great story. It started out promising and all went downhill. The characters lacked real depth, the story felt rushed the male narration was just bad, the voice he used for the female lead made her sound like an old lady.
It kind of killed the whole story for me. I dreaded his turn to narrate.

I really loved this story. As always, Casey Bond has an endless imagination and a gift for characterization! The only complaint I have with this version is the male narrator who does okay for Phillp but makes the female protagonist, who is a beautiful fae witch, sound like a hunchbacked old hag.

I entirely loved the story. There was just enough action. The romance was just perfect.

I love this story

This book is my first by author Casey L. Bond and certainly not my last. I love the world she created. I love how she spins a so compelling fairy tale retelling. We follow Luna who is cursed to sleep during the summer. Only, her slumber is not at all peaceful because it leaves her vulnerable to her enemy. As the story goes, we see that the threats do not come only through her bond with her enemy. The story is full of twists that keep you hooked and the love story between her and the prince is the cherry on top ❤️