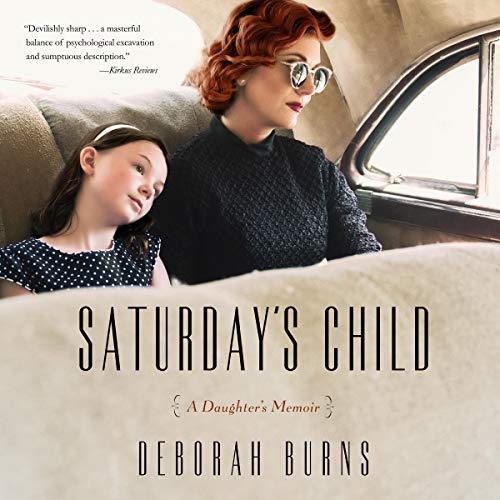 An only child, Deborah Burns grew up in prim 1950s America in the shadow of her beautiful, unconventional, rule-breaking mother Dorothy, a red-haired beauty who looked like Rita Hayworth and skirted norms with a style and flare that made her the darling of men and women alike. Married to the son of a renowned Italian family with ties to the underworld, Dorothy fervently eschewed motherhood and domesticity, turning Deborah over to her spinster aunts to raise while she was the star of a vibrant social life. As a child, Deborah revered her charismatic mother, but Dorothy was a woman full of secrets with a troubled past, a mistress of illusion whose love seemed just out of her daughter’s grasp.

In vivid, lyrical prose, Saturday’s Child tells the story of Deborah’s eccentric upbringing and her quest in midlife, long after her parents’ death, to uncover the truth about her mother and their complex relationship. No longer under the spell of her maternal goddess, but still caught in a wrenching cycle of love and longing, Deborah must finally confront the reality of her mother’s legacy and finally claim her own.

I lived that Deborah narrated her story; her voice beautifully conveys the tone of this rich story. I loved it.

I struggled to finish because of her pitiful sounding voice. I'm assuming the narrator was the author, otherwise I can't see audible hiring someone who reads like that!!

So many things in common with me and how Deborah recounted her story that I relished every descriptive detail. I’m ready to listen to this heartwarming story again as it helped me to see details in my own mother daughter journey that ended similarly. Thank you Deborah.