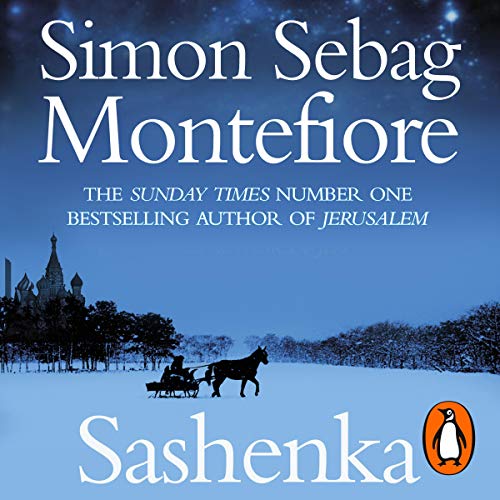 Winter, 1916: in St Petersburg, Russia, on the brink of revolution. Outside the Smolny Institute for Noble Young Ladies, an English governess is waiting for her young charge to be released from school. But so are the Tsar's secret police....

Beautiful and headstrong, Sashenka Zeitlin is just 16. As her mother parties with Rasputin and her dissolute friends, Sashenka slips into the frozen night to play her part in a dangerous game of conspiracy and seduction.

Twenty years on, Sashenka has a powerful husband with whom she has two children. Around her, people are disappearing, but her own family is safe. But she's about to embark on a forbidden love affair which will have devastating consequences.

Sashenka's story lies hidden for half a century, until a young historian goes deep into Stalin's private archives and uncovers a heartbreaking tale of passion and betrayal, savage cruelty and unexpected heroism - and one woman forced to make an unbearable choice.

What listeners say about Sashenka

A simply phenomenal book where the story and performance powerfully transport the listener to another world that feels at once distant yet disturbingly real.

I loved it. I didn't want it to end. it is another excellent read from Simon

Beautifully written and presented, Tuppence Middleton provides a superb delivery to the ongoing world of Stalin and the various intrigues and stories that SImon Sebag Montefiore has written, be sure to read the others in this compilation.

I honestly thought this saga would never end but I stuck with it.

Russian history is so complex and so complicated and so rich and so sad and this well researched book explains and explores many aspects of Russia"s tragic history beautifully. I didn't find it an easy story to stay with but that's okay. It challenged me. It's probably a masterpiece in the vein of Dr Zhivago or War and peace. And I appreciate the skilled writing and its reach because it is an epic tale, well told.

Did I enjoy it? Not entirely. Here and there I was moved, mostly I was appalled and I didn't fall in love with Sashenka as I think I was supposed to do. Here and there I gasped, Shocked. Such madness and paranoia. and I did want to find out what befell Sashenka and what happened to Snowy and Carlo. I think the story will stay with me for a long time.and I learned a lot about Russia and Stalin and history and propaganda and perhaps a little more about Russian psyche. Obviously It Is no easy undertaking to write a book like this and I can't fault anything about the gifted and clever writing and what must have been years of research. But I didn't warm to the persona of Sashenka or the main characters and the end was like a glass of cold water thrown in my face. I d say if you have any interest in Russian history and are up for a long saga cleverly put together and well written and researched and don't mind a challenging read ... Or listen .... Go for it. It's one I didn't altogether love but won't forget or regret listening to either .

At times I loved this book and at others I found it boring! A strange experience!

The story of Sashenka is compelling - well written but wordy and over descriptive at times but one cannot fault the way the story - based on true facts of the time - rattles along. I found myself listening to the book at every available moment and felt as though I had lost a group of friends when I finished it. It has broadened my understanding of Russia since the 1920's, a Russian friend who read the book at the same time as I was listening to it, was very complementary about the factuality of the book. My only slight grumble would be that I found the reader a bit twee and her voice irritated me - however all in all I would recommend this as a very good listen.

The reader embarked on a ridiculous attempt to portray a supposedly Russian accent, which turned out to be standup-comedian-like. Next time I hope the book will be read with less stereotypes and silly condescendence to the Russian culture that Montefiore attempts to portray.

What made the experience of listening to Sashenka the most enjoyable?

She has a really lovely voice but she mispronounced every single Russian word in the book including the protagonist's NAME. Every line had an agonising mispronunciation in it (and there were quite a few English ones she misread too). She did appalling Russian accents for everyone, making terrifying scenes simply ludicrous. It was embarrassing to listen.

More a history lesson than a novel

I found the huge volume of historical narrative overwhelming in this book. The authors skills as a historian take over the fiction for me and too much information and factual information made the story difficult to immerse myself in. I also have great doubts about the advisability of using fake Russian accents for the dialogue. Why would Russians speak to each other in Russian accents? It just constantly reminds the reader that it’s not real and for me it smacked of mediocre drama.

I had listened to Simon Sebag Montefiore's book on Stalin and was very impressed.
This gave me the impetus to look for more of his work and I found this book. Unfortunately the narration is dreadful, to the point i just stopped.