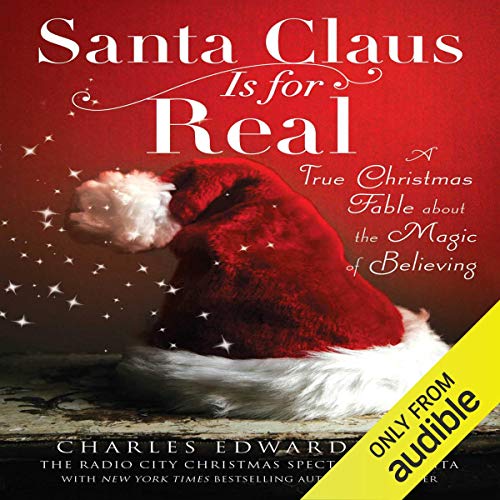 Santa Claus Is for Real

A heartwarming true-life fable from the Radio City Christmas Spectacular Santa - including his personal journey of discovering the magic of Christmas. Every year, over a million people attend the Radio City Christmas Spectacular, where they have the pleasure of seeing Charles Edward Hall don a traditional red suit and become the world's most famous Santa Claus - a role he has played for 27 straight years.

But Hall wasn’t always such a jolly old soul. Believe it or not, this Santa was once a Scrooge. For the first time, Charles tells the inspiring story of his own transformation, from a wide-eyed child who once caught a glimpse of Santa through a frosty windowpane, to a young man who lost his faith in jolly old Saint Nick.

It wasn’t until fate intervened, in the form of an unexpected role, a stage malfunction, and hundreds of letters from children, that Charles rediscovered his Christmas spirit. Ultimately, he realized Radio City was his life’s work, and that Santa isn’t just a role. He lives in the hearts of the millions who attend the Radio City Christmas Spectacular, and everyone who embraces the Christmas spirit.Santa Claus, in other words, is real. When Charles needed him most, Santa was there, with kind words and a special gift. As this delightful true-life fable proves, he is there for everyone. All it takes is a good heart, an honest joy, and a belief in the magic of Christmas.

What listeners say about Santa Claus Is for Real

Perfect for getting into the spirit of Christmas!

A wonderful way to remind ourselves of how we can all be instrumental in celebrating Christmas, just be kind. Thanks Charlie!

I loved everything about this book. You get a bit of everything that is great about Christmas, from the struggles of being Santa Cluase to the learning and joy of acting as Santa Clause for 28 years.
Get this book, It will but a smile on your face.

The narration is not to be missed.